Sure, Kalinda and Will, arguably the sexiest, most passionate (and passionately loved?) characters on The Good Wife, have gone the way of the dodo. But there are still so many reasons we’re excited for the return of The Good Wife tonight.

As a fascist ballet instructor in Center Stage

Peter Gallagher has a recurring role in season 7. In my imagination, this role is going to consist of him watching lawyers at trial and then pulling them aside to mesmerize them with his Eyebrows, like the lawyer version of his character in Center Stage. “Cary, you’re a talented lawyer, but you just don’t have the body type to be truly great at it. Your turnout’s all wrong.” Cary will be sad, but he’ll have to agree. Such is the power of the Eyebrows.

How about some apple pie, Eli?

Eli is the Olivia Pope of The Good Wife: an unstoppable force against which everyone else is powerless. But in season seven, it looks like he’ll be meeting his immovable object, as none other than Margo Martindale is coming to challenge his authority. And let’s face it, if anyone could give Eli a run for his money, it’s Mags Bennett.

According to the Kings, she’ll play a renowned campaign strategist named Ruth Eastman who has her ear to the ground in Iowa, the ever-crucial swing state. She won’t be working for Hillary, so Eli and Peter will recruit her to work on Peter’s vice presidential campaign. Ruth is deceivingly maternal but terrifyingly ruthless, so basically every character Margo Martindale has ever played.

“She really is a cunning Machiavellian woman who is just as strong as Eli and goes toe to toe with Eli on a lot of issues,” Robert King told TV Guide. “Margo and Alan are fantastic together. It’s like Eli has finally met his match.”

The Kings have always been brave about taking both the show and its characters, especially Alicia, in new directions. Six seasons of The Good Wife have taken Alicia from a smart, demure, repressed homemaker and wife, to a sharp lawyer who can balance her morality with her desire for success, to a partner at her own firm who’s willing to destroy relationships to pursue her dream, to a disgraced politician. The old Alicia, hair pulled back, lipstick pale, is almost unrecognizable, but the Kings have carefully shown the motivations behind each transformation. She went from being a timid mouse to being actually terrifying sometimes. And now that (mild spoiler!) she’s turned down Louis Canning’s offer for partnership and struck out on her own, she may achieve true independence and discover a whole new side of herself. 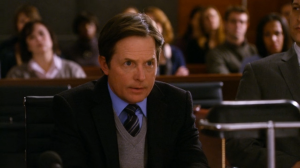 Speaking of which… Louis Canning = Loose Cannon. Did anyone else take like five seasons to notice that?! I’m on the lookout for more puns. Does “Elsbeth Tascioni” mean something in real life?

(No, not the real one, unfortunately.)

Alicia’s trajectory from the dutiful jilted wife to a formidable career woman (and politician) in her own right clearly took inspiration from Hillary Clinton. But now that Peter is running for vice president, the show will actually follow the Democratic primary in real time, featuring real-life candidates like Clinton (played by an as-yet-unnamed actress, not the actual former Secretary of State). This will not only make this season the most explicit social commentary yet, but will add layers of meta that will make all of our heads spin.

“It’s gonna comment a little bit on what’s going on in the Democratic primary, but yes, Peter will be running against the real Hillary,” said Robert King. “Peter, as the governor of Illinois, is trying to come in at least second place in the Iowa caucus because that’s the way he can make himself look better to Hillary Clinton as a vice presidential candidate or whoever gets the nomination.”

(Yeah seriously, guys, let’s not count Bernie out yet. Let me keep my dreams a little while longer.)

Jeffrey Dean Morgan as The Comedian

I’m still heartbroken that Finn only lasted for one season. I was predisposed to hate him, as he was Will’s de facto replacement, but Matthew Goode’s performance and chemistry with Julianna Margulies won me over, and now I have to summon the energy to ship her with yet another new love interest. Stop toying with our emotions, TGW!

But if someone had to replace Finn, it might as well be Jeffrey Dean Morgan, who is joining the series as a regular in season seven. He’s charismatic, he seems mature enough for Alicia, and he’s the kind of ubiquitous character actor whom you love for one random thing he was in one time (for me, it’s Watchmen).

Oh I’m sorry. Did I say Will and Kalinda were the sexy ones? Look at this lady. Look at her insane fur collar. I don’t even know what article of clothing that collar is part of. A cape? A sweater? Does it just go around her neck like a necklace? It’s so great.

More seriously, Diane Lockhart is my hero. She’s a ridiculously soft-hearted liberal but she’s tough in the courtroom, she’s funny, she’s kind to her loved ones, and she’s mad fun over a cocktail. Though I think the colder, more morally gray Alicia is one of the best-written and most interesting characters on TV, I love having one person on this show that I legitimately would want to be like in real life.

Diane and Alicia have some great scenes together, but for the most part, the representation of female relationships on this show has suffered ever since Julianna Margulies and Archie Panjabi refused to be in the same room together somewhere around season four. Now, with theater actress and playwright Cush Jumbo joining the cast as a young bond lawyer who shows Alicia the ropes, the writers will hopefully have another opportunity to write for a complex, well-realized female friendship. We’ll all miss Archie Panjabi, but even if this friendship pales in comparison, it will be better for their Bechdel rating than having Kalinda and Alicia talk on the phone once a year.

9. Hilarious Uses of the Phrase “The Cloud” [KHT]

“It’s your cloud, lady” —The IT guy as he storms out after trying to fix Alicia’s blue screen of death. Because anyone has ever said that ever.

It is never more clear to me that adults (real adults, like ones with mortgages and stuff, not adults like me who buy fresh vegetables once every six weeks and let half of them rot in the fridge till their next health kick) write The Good Wife than when they talk about Internet Stuff.

10. She Ain’t Nothing but a Thicky Trick [Janes]

This video. I just can’t. As if it wasn’t enough that a procedural drama in its fifth season decided to craft a blistering satire of Glee‘s legal troubles (and its general trashiness, but that’s neither here nor there), they actually managed to write a sadistically catchy song that you’ll hate yourself for listening to over and over again (much like a Glee cover). And then, to top it all off, they made this video of the cast straight-up jamming and immediately made the world a better place. I have no idea why this video exists, but I’m so glad it does.

Everything about it is wonderful and life-affirming, from the hilariously on-point sparkly costumes and bombastic dance moves, to Julianna Margulies looking as dignified and uncomfortable as we’d expect Alicia to in this situation, to the randomly but brilliantly cast Matthew Lillard as the cover artist suing someone else for creative theft, to Christine Baranski inexplicably dancing with the Glee kids in rollers, holding an equally inexplicable banana. It’s sad to see Will being adorable now, but hey guys, we’ll always have Thicky Trick.