Persephone is a liminal figure, evoking the duality of the seasons which, as a result of the pathetic fallacy, we associate with dualities of human nature: light versus dark, warmth versus cold, passion versus frigidity, humanity versus roboticism. In Sylvia Plath’s “Two Sisters of Persephone,” this duality is used to uncover the contradictions inherent in the societal ideal of femininity. 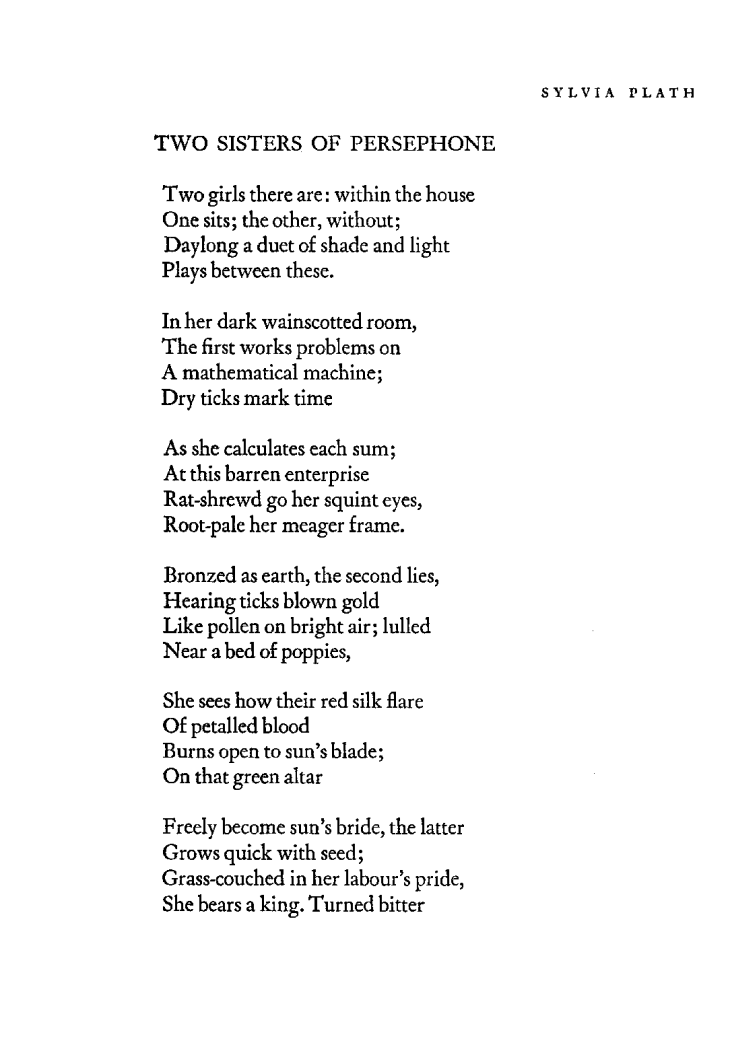 Persephone had no sisters, so these two women are more metaphorical than literal: two sides of the woman herself. The “duet of shade and light” lies within every person, but Persephone’s duality is incarnate in two separate people because the two sides of “woman” are diametrically opposed. The dark side buries her mind in the wintry world of mathematics as she counts down barren moment after barren moment, while the light side gilds every moment with the passion that attracts the sun to her.

But the poem is not an argument for passion; the light side fulfills her function as a woman by opening herself to be used by another person, first the sun, then her incubated child, and is ultimately used up and soured to life. The dark side, meanwhile, doesn’t come to an unhappy end, she simply comes to an end following an empty, passionless life. She successfully avoided indignity and abject misery, but didn’t get to be “a woman.” She didn’t fulfill her prescribed raison d’être as a female specimen, nor did she have the opportunity to be a lively human being. There are choices as a woman, Plath intimates, but there are no good ones.

Persephone is a figure particularly germane to this point. She is a young woman who was literally raped into an embodiment of the two sides of woman: the ice queen of the Underworld on the one hand, and the emblem of nature and vitality whose resources are mined to desolation on the other.