You’ve Got Mail came out on December 18, 1998–twenty years ago today. Having just finished a rewatch of Dawson’s Creek that could probably be subtitled, “This didn’t age so well,” we can’t help but notice that rewatching You’ve Got Mail (which I do at least twice a year, if not more) is the exact opposite experience.

For those who aren’t familiar, You’ve Got Mail is about Kathleen Kelly, the owner of an independent bookstore on the Upper West Side, and Joe Fox, the heir of a corporate fortune earned by his father, who is basically the CEO of a fictional version of Barnes and Noble. Each of them has a secret Internet pen pal that they’re in love with–not realizing that their beloved pen pal is their sworn professional enemy.

Sure, the men are all wearing wide ties and baggy pants, and the technology is hilarious–our star-crossed pair have plenty of time to cool their heels to the sound of a beeping dialup before they connect to the internet. And yeah, in the Year of Our Wokeness 2018, it’s not GREAT that Tom Hanks totally tricks Meg Ryan into telling him stuff about her relationship with his online catfish persona. But come on. This movie is the Gabrielle Union of romantic comedies. It will never grow old. So Janes and I collected 26 reasons why we still love this movie to death.

Fox Books is the discount corporate bookstore that comes in and takes all of the business that formerly belonged to Meg Ryan’s charming independent bookstore. Fox Books is basically Amazon.

Three generations of rich white male NYC business tycoons (with a ridiculously on-the-nose macho last name) whose children are the same age as their grandchildren. Too real. 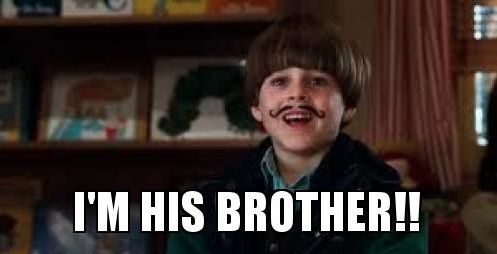 That “institution” that is somehow always in danger, aka McNally Jackson or even The Strand. This is less timeless and more prescient.

Frank is Meg Ryan’s technophobic, ultra-leftist-but-probably-not-about-things-that-don’t-affect-white-men, journalist boyfriend. In 2018, he’d be writing hot takes on the Atlantic blog. In 1998, he just spends his time writing incendiary articles about how the closing of a single bookstore represents a Terrible Development in Modern Culture. 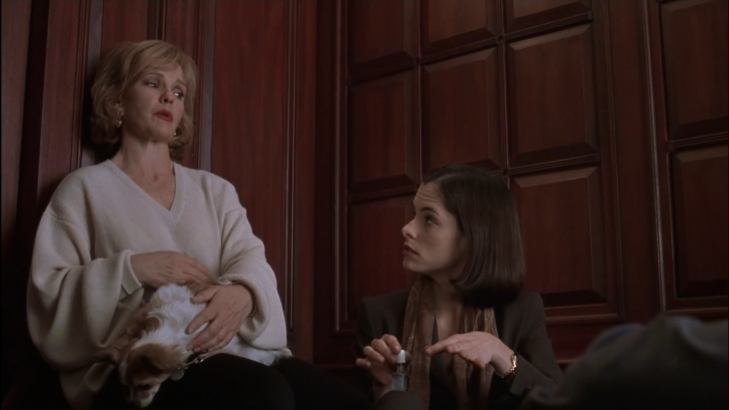 Patricia (played by the inimitable Parker Posey) is Joe’s super-New-Yorky corporate girlfriend. She wakes up every morning and announces that Random House fired So-and-So and So-and-So got a great review. I’m not sure how she finds this out, but it sounds a lot like the Publishers Marketplace email I get on a regular basis telling me who’s gotten a snazzy book deal and who’s left which publishing house. She is an over-caffeinated, ambitious, bratty New Yorker and SO true to type. Also, is it wrong that I find her relatable? I would SO touch up my manicure if I were trapped in an elevator. A girl’s gotta make productive use of her time, you know?

Unfortunately, since Frank was possibly the first pop-culture character to be cyber-cheated on, he doesn’t know about this, and he misses all the VERY OBVIOUS signs that Kathleen is e-stepping out on him, such as the fact that when he comes in the room she slams the laptop shut and acts like she’s never seen it before in her life. Frank! GET A CLUE!

You might think marveling at the wonder that is Starbucks, as Joe Fox does in one of his emails, is so last millennium, but I passed the new Starbucks in NYC’s Meatpacking District today at 2pm and there was an actual LINE, roped off as if people were waiting to get into a club, to get into Starbucks’ new luxury roastery. (Basically, the world has come full circle. Starbucks offering take-out lattes was the last word in fanciness in 1998. Once that became de rigeur and then, eventually, passe, all the other coffee shops far outstripped Starbucks, which is now forced to open the luxury version of itself in order to attempt to keep up with the Frankenstein monster it created. And, that might be the most Nora Ephron-esque paragraph I’ve ever written.)

As you will probably recall, when our star-crossed lovers arrange to meet in person for the first time, Joe Fox catches sight of Kathleen and chickens out, leaving her waiting alone. Was Kathleen Kelly the first film character to get stood up for an in-person meet-up after talking to someone on the internet?

Kathleen Kelly announces she could never be with someone who owns a boat. It will never not be douchey to own a boat. Tom Hanks is basically a hotter Andy Bernard.

It’s always fun for bros to make fun of other bros, as Joe Fox does when teasing Kathleen about his alter ego.

George, who is played by the ever-charming perpetual 90s sidekick Steve Zahn, likes to interject unnecessary comments about his rent-controlled apartment into every conversation. Keets and I used to live in a rent-stabilized apartment and honestly, we bragged about it constantly. It’s a thing.

Birdie, Kathleen’s quirky store accountant, announces that she’s rich: “I bought Intel at 6.” Substitute, like, Amazon at whatever, and you’ve got every conversation at my job.

Frank announces that he could never be with someone who doesn’t take politics as seriously as he does. This has aged SUPER well. What seemed crazy and pretentious in 1998 now seems like a reasonable, even principled stance.

Such as Joe Fox’s cranky billionnaire grandfather. We DEFINITELY still have those!

From the very beginning of this movie, even as she fights to save her independent bookstore, Kathleen is also going through something that I think almost every person has to wrestle with. What is her work? Why does she do it? Is it as important as it feels? It’s an important question, and the movie doesn’t insult us by treating it as a prop for the romantic relationship, but as a real problem Kathleen has to face in addition to her romantic entanglements. I find this very relatable–I have my ambitions and they are dear to my heart, and the moments when your hopes seem about to be dashed are also always the moments where you find yourself wondering what you really care for, and why.

Watching it now, I feel like I gathered my idea of how a Hipster Literary Professional New Yorker should dress partly from this movie. How cute is this turtleneck+sweater dress+tights outfit?

18. Men who Pretend To Be Weaker Than Their Young Relatives
Joe Fox does this when he’s at the carnival with his brother and aunt, and it will never not be cute.

19. Thinking the Very Idea of a Baby Gap Is Depressing
Was Nora Ephron an anti-capitalist before it was cool?

20. The fact that Christmas decorations in shop windows are amazing
I don’t care about the commercialization of Christmas. I will buy ANYTHING from a place strung with twinkle lights. Look at Kathleen decorating her store and tell me it doesn’t give you the warm fuzzies.

By far one of my favorite scenes of this movie is a totally random scene where Kathleen, Frank, George, and the other bookstore employees stand around a piano and do a TERRIBLE job of singing “The Instrument Song.” Something about the way Kathleen laughs at Frank’s terrible singing and everyone is kind of trying to sing well but also doesn’t really care is so homey and nice and heartwarming. (It doesn’t hurt that this is preceded by an equally true-to-life depiction of a rich WASPY holiday, in which everyone is forced to sit on the couch in a fancy living room while the dolled-up youngest girl sings “Tomorrow.”)

“I had a gut feeling you would be on line now,” types Joe Fox, complete with the space between “on” and “line.” And then they keep referring to “The Godfather” fully title-cased and enclosed in quotations! How much does that remind you of IMing with your dad?

Joe sends an email with the subject line, “In case you were wondering, I’m not perfect.” Later, Kathleen’s subject line is “On Being Stood Up.” How precious is that? (And yes, I do realize that at 31, I’m probably not much younger than these two are supposed to be.)

At first, I thought it was unrealistic that Kathleen and Joe run into each other as often as they do, even living in the same neighborhood. But then when I tried to remember times I randomly ran into people in New York, it was always the people I least wanted to see.

He looks dorkily cute here, but he aged VERY well.

When Joe Fox puts his hand on Kathleen’s shoulder and says, “If I hadn’t been Fox Books, and you hadn’t been the Shop Around the Corner. And you and I had just met. I would have asked for your number. And I wouldn’t have been able ot wait twenty-four hours before calling you up and saying, oh, how about coffee, or drinks, or dinner, or a movie… for as long as we both shall live?” GUH. IT IS THE BEST.