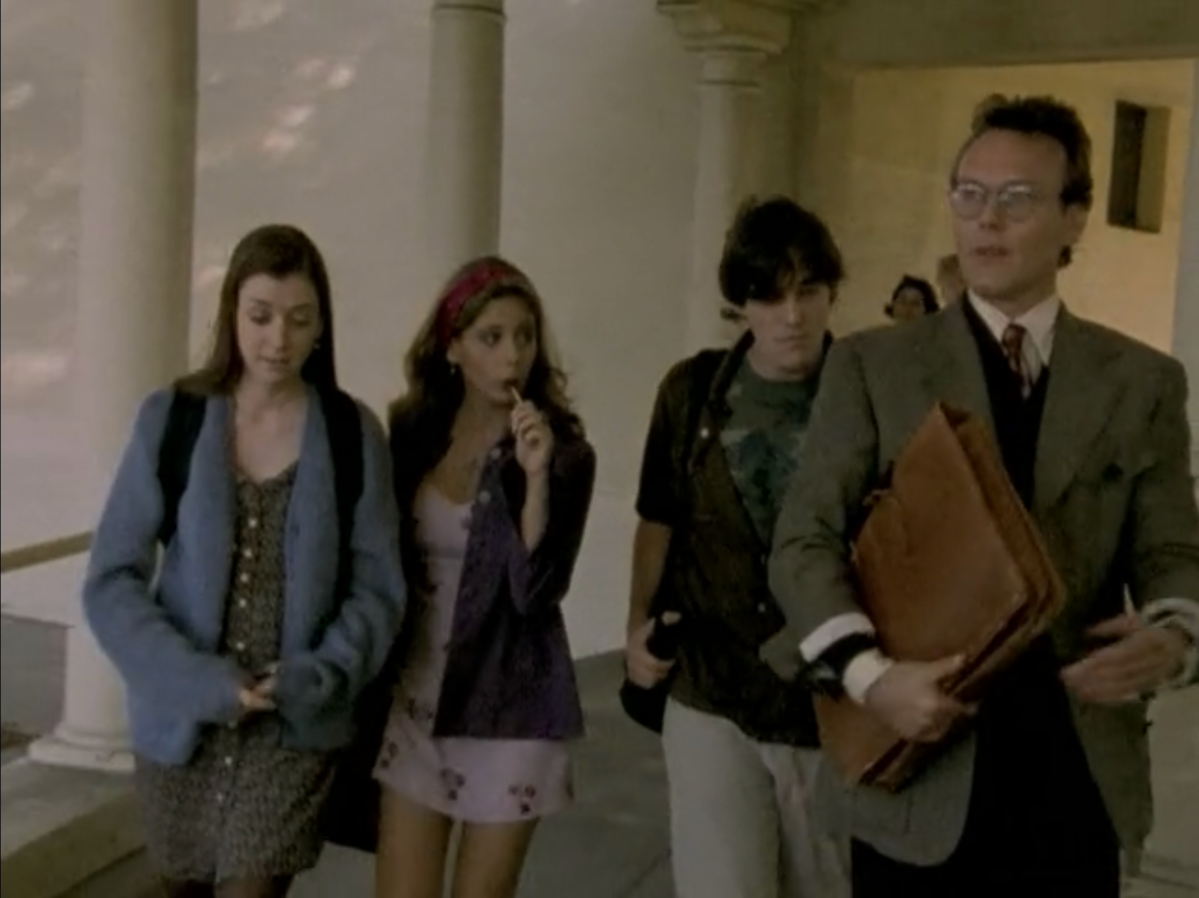 Season 1, Episode 1: “Welcome to the Hellmouth”

In this episode we meet Buffy Summers, a Normal Teenaged Girl with Flippy Hair and Barrettes who has just moved to Sunnydale–because she burned down the gym at her last school and got kicked out. Unfortunately, Sunnydale is majorly infested with vampires. Which is coincidentally why Buffy got kicked out, because she’s actually a vampire slayer, which her clueless mother hasn’t figured out even though Buffy basically gives it away in every conversation (more on that later). Buffy meets Xander, a lovestruck skateboarding dweeb; Willow, an eager nerd who has an inexplicable crush on Xander; Jesse, Xander’s creepy gross friend; Cordelia, the mean and popular jerk; and Giles, the librarian. Only it turns out Giles already totally knows about how Buffy is the One Girl In A Generation with the skill and strength to fight vampires.

END_OF_DOCUMENT_TOKEN_TO_BE_REPLACED

Janes and I had so much fun rewatching all of Dawson’s Creek in 2018 that we decided to watch another show together, and blog the whole thing.

But there’s a twist! This time, we chose a show that one of us (Janes) knows pretty much by heart, and the other (me, Nerdy Spice) has never watched — Buffy the Vampire Slayer.

END_OF_DOCUMENT_TOKEN_TO_BE_REPLACED

Happy 25th birthday to Friends! This show first aired a full quarter-century ago, and yet given how often it seems to be quoted in pop culture, it easily could’ve been yesterday. “He’s a TRANSPONSTER!” “We were on a break!” “How you doin’?”

And sure, those lines are classics. But Keets, Janes, and I have watched Friends waaaaay too many times, and there are some lines that no one ever quotes that still make us laugh every freaking time.

END_OF_DOCUMENT_TOKEN_TO_BE_REPLACED

Somehow this story was both so exciting that it literally made the hair on my neck stand up when I heard it, and also the most unimportant thing I’ve seen on Twitter since… ok since the meme 3 posts above it, Twitter is basically all garbage.

Conveniently, this story also has the property that if you care at all about it, you already know all about it, so this post is even more irrelevant than the Twitter meme two posts above that other one. BUT I DON’T CARE THIS IS AMAZING:

Claire Bourne recently published an article on marginalia in a particular First Folio copy of Shakespeare’s plays, held in the Free Library of Philadelphia since 1944. The notes drew her attention by being especially sensitive to the nuances of Shakespeare’s language, extending to the point of proposing emendations to words, and more poetic reorderings of key phrases.

One reader, looking at the photos in her article, noticed a similarity of the author’s handwriting to that of one John Milton. I’m sorry, I stuttered:

Like I said, if you found that reveal at all exciting, you already knew. Sorry everyone else. There’s definitely further research to be done to confirm that this handwriting is actually (or very likely) Milton’s, but so far no serious objections to the theory have been raised.

The number of Ph.D. theses, books, articles, everythings that are about to be written about this text boggles the mind. There’s probably at least 50 years of work in understanding how Milton’s reading of Shakespeare affects our understanding of both Milton’s work, and Shakespeare’s. (Or there would be 50 years of work if the U.S. higher education system wasn’t going to collapse before then… but that’s a story for another time. )

We’re back to the business side of drug dealing, which is about as fascinating as it sounds. END_OF_DOCUMENT_TOKEN_TO_BE_REPLACED

Welcome to Veronica Mars Season 4! Fair warning: this is not going to be some objective critique-y recap. Your recapper, who Was Watching Veronica Mars Before It Was Cool, is basically just a big old fangirl who’s excited for her favorite show to come back.

Anyway, I’m getting started on this a bit late because I decided at the last minute to marathon the entire show before watching Season 4, which I’m very glad I did: it made me realize that all the fandom complaints about season 3 were honestly kind of unfounded. The mystery was twisty, the jokes were still great, and Veronica was an ever-more-layered and interesting character. Yeah, Piz was a drag, but Veronica was in college: most people have a Piz in college. (And most people, at one point or another, are the Piz.)

And with that brief apologia for Season 3, we’re off to season 4!

END_OF_DOCUMENT_TOKEN_TO_BE_REPLACED

Jesse and Walt play out a rom-com, and Hank nearly dies in the most nail-biting sequence of the show so far. END_OF_DOCUMENT_TOKEN_TO_BE_REPLACED