Jesse and Walt play out a rom-com, and Hank nearly dies in the most nail-biting sequence of the show so far.

Summary: Walter starts work at Gus’ underground meth lab, with a new, nerdy lab assistant. He’s perfect on paper–basically just another Walt, but even nerdier and more submissive. But we all know Walt misses Jesse.

So when Hank calls Walt to ask whether Jesse–Walt’s supposed weed dealer–has an RV, Walt runs out to get rid of the RV and protect Jesse. But then, due to a miscommunication with one of Jesse’s stupid friends, Jesse leads Hank right to the RV, which Walt is currently trying to clean and dispose of. They have an extremely close call, where Hank is literally rattling the door of the RV with Walt and Jesse inside, until they’re saved by Mr. Heckles from Friends (!), who rightly tells Hank that he needs a warrant. Then Walt calls Saul, and Saul has his assistant call Hank and pretend that Marie is in the hospital to get him to leave. It works, and Jesse and Walt destroy the RV together.

Also, the twins get impatient to kill Walt and start to menace Los Pollos, so Gus tells them that it was Hank who killed Tuco, so they’ll kill him instead of Walt. Oh no! (Just kidding, I don’t really care. Although I’d rather them kill Walt than Hank, I guess.)

Walt packing a bag lunch and writing his name on it like a five-year-old, to work in a meth lab. The fact that it’s a PB&J sandwich, with the crusts cut off, is icing on the cake.

Walt’s nerdy little friend abandoned his doctorate to work in a meth lab because he’s “a libertarian.”

I love that this whole episode employs romance tropes, and essentially positions Jesse and Walt as the central love story of the show. First, Walt and the new assistant have a quiet, flirty scene where they get to know each other, where the assistant literally quotes an entire Walt Whitman poem to him. Then, when Walt learns about Hank’s surveillance, he calls Jesse to warn him, but then hangs up, and goes out to protect him anyway. (Aw!) Then they’re all sad together when they destroy the RV, because it’s a symbol of their happier times together. So much HoYay!

Hank taking the tape off the bullet holes in the RV, making little spotlights on Walt’s shirt. 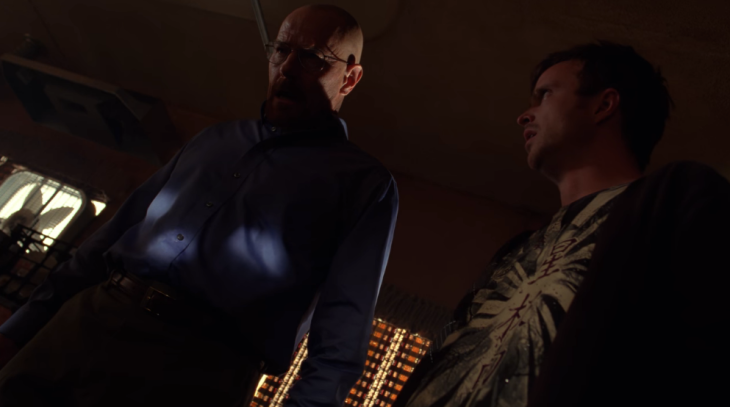 Hank’s face when he realizes he’s been tricked. I don’t get to say it much, because the character is so one-note, but Dean Norris is a really great actor. 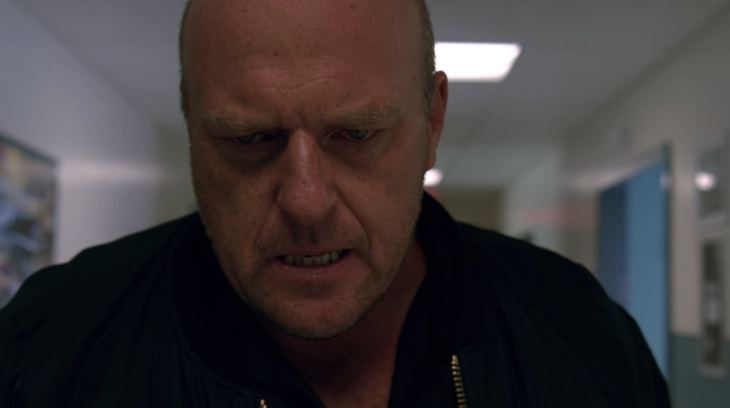 Why wouldn’t Badger warn Jesse that the DEA was onto them? I know he’s stupid, but there’s no way any drug dealer would be that bad at avoiding the police.

The Twins finally talk! And say… one word. This whole not-talking thing was sort of cool and menacing at first, but now it’s getting a little silly. They’re still human beings.

Again, Walt’s character development is so telegraphed to the point that it’s almost too linear. Shows like The Americans and Mad Men are praised for their character development because they built rounded characters that were capable of being taken to surprising places. But Walt has no place to go anymore. He started off the show an obnoxious wimp who wanted to be an obnoxious alpha male, and now he is one. At one point, he actually says the words, in his best finance douche bro voice, “Name one thing in this world that is not negotiable.” Does that mean we can end the show now?

After that, Jesse is on a tear. The smartest move is to not press charges, and use this as leverage to get the police to leave him alone. But Jesse wants to bring Hank down, and doesn’t seem to care that that would almost surely bring a rain of police attention on the whole operation. Jesse also wants to continue cooking, even though he knows the DEA is onto him, and tells Walt that if he’s caught, he’ll give them Heisenberg and make a deal. Saul starts talking about potentially getting rid of Jesse, so Walt gets Gale fired and brings Jesse back in, this time as a partner. Twoo wuv!

At the end of the episode, the twins come after Hank, right after he’s (conveniently!) handed in his gun. Gus, who presumably wants the twins out of the way so he can keep profiting off Walt, gives Hank one minute’s notice before they kill him. Hank kills one of the twins with his car, but then the other twin gets the best of him and shoots him twice. He’s about to finish Hank off, but then leaves to get his axe, to avenge his brother properly. Hank uses the time to reload, and kills the other twin in the nick of time.

More romance tropes! Walt visits Jesse in the hospital when he’s injured, and then is all grumpy with Gale when he’s being completely lovely. He tells Jesse that they have “a shorthand with each other, that [Walt is] never going to reach with Gale.” I love it. It’s making me think this entire show would be better as a rom-com.

An overly cheery Saul in the hospital, telling a half-dead Jesse that this beating is “the best thing that could have happened to [him]” and Walt that he’s “officially the cute one in the group,” because poor Jesse looks like Two-Face.

Hank crying in Marie’s arms in the elevator. I’ve been hard on these two, but now we’re finally seeing a little bit of what makes their marriage tick. It’s nice.

Holy shit, that last scene. Before we watched this episode, my partner and I were talking about how there have been plenty of suspenseful scenes on this show, but never one where we were really on the edge of our seats, mostly because we don’t really care about most of the characters. But the combination of Hank becoming a little bit more human/likable, and the sheer terror of Gus’ phone call to Hank, made this the best action scene of the show so far.

Once again, we get a flashback to a character’s childhood right before they die. Again, it’s a cheap trick–one that telegraphs the Twins’ deaths, no less.

Mike, the badass assassin, has a sweet scene with his grandkids–the first sign of the complex character he’ll become. Meanwhile, Tuco’s uncle gets a scene that seems nice at first, but ends with him trying to drown one of his nephews in his beer pool. Only white people get to be complicated on this show.