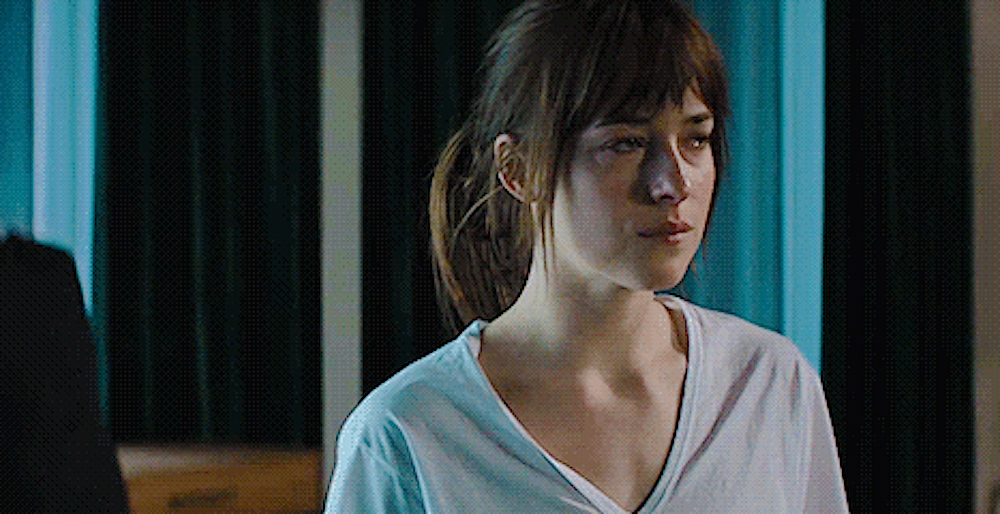 The Razzies have come under fire in recent years for being an opportunistic, publicity-hounding sham that doesn’t add anything new to the conversation, or even manage to be funny. Rather than effectively satirizing “legitimate” award shows like the Oscars, they’ve become known for taking in-poor-taste potshots at easy targets, beating each year’s dead horse until it’s really, really, really dead.

But there was one unequivocally undeserved nomination that illustrated the organization’s lack of critical thinking: Worst Actress for Dakota Johnson. For all that Fifty Shades is, indeed, a terrible, society-ruining film, those of us who have had the misfortune of reading the books know that it could have been so, so much worse, and Dakota Johnson’s performance almost single-handedly made this shitshow of a story somewhat watchable. (With some help from Sam Taylor-Johnson, who made interesting choices considering what she had to work with. But the director is generally responsible for the overall quality of the film, so I can’t blame the Razzies too much for that one.)

Johnson’s performance was widely praised even as the movie itself was eviscerated by critics, and rightly so, because she played a cipher of a character with unexpected depth. She even seemed like–gasp!–a flesh-and-blood human being at times, at least when she wasn’t being forced to do that stupid lip-bite or breathe really heavily in an elevator. Not to mention that her comedic timing was pitch-perfect in what should have been a decidedly unfunny movie; while my friends and I were often laughing at Fifty Shades for all of the wrong reasons, Johnson’s wittily self-aware line delivery led to several honest-to-goodness intentionally funny moments. Most memorably, she made all of us laugh out loud during the drunk dial scene, in which she cracks a few canny, meta jokes about the juvenile melodrama of the central relationship (not to mention the unhealthy dominance aspect; I laugh out loud every time she drunkenly exclaims, “You’re so bossy!!”):

Even more, Johnson was able to wring a bona fide emotional arc out of Anastasia Steele, who is essentially a paint-by-numbers embodiment of a feminist’s nightmare. In the text of the script, Ana is a profoundly empty, perpetually submissive fantasy, an irritatingly plucky young woman who keeps insisting that she’s “stubborn” and “independent” even while she is disturbingly complicit in her own disempowerment. But Johnson deftly conveys all of Ana’s (still questionable) motivations, and makes you feel for her every step of the way, almost against your will. And in the end, when Ana insists that Christian reveal the full extent of his sadism, only to realize that she can’t handle it, and that she’s hitched her wagon to a deeply disturbed human being, it’s genuinely upsetting. I was physically uncomfortable during all of the sex scenes, once again for all of the wrong reasons, but the final visit to the Red Room of Pain was painfully unsettling for all of the right reasons. As a result of Johnson’s emotional, sensitive performance (and a few of the director’s choices), the last few scenes play more like a straight drama about a fucked-up relationship (which is, honestly, what Fifty Shades of Grey really should be). If you don’t subscribe to the Fifty Shades mystique, those last few scenes are incredibly sad, and almost moving.

“Why do you want to punish me?”

Dakota Johnson’s Razzie nomination is not only unwarranted, it’s a little absurd. [Update: she WON. What is this nonsense??] If anything, she should have been in contention for a Best Actress nomination at the Oscars this year, because it’s hard to be that good in such a fucking abominable movie. Hell, it’s probably harder to be decent in a bad movie than it is to be great in a good one. Every actress who was nominated this year is immensely talented, and has earned her nomination; but in a sense, it’s easier to turn in a standout performance in Room, Carol, or Spotlight than it is to be credible and affecting in Fifty Shades of Grey.

And it’s certainly not the case that every talented actor can be noteworthy, or even decent, in a terrible movie. Eddie Redmayne, who was just nominated for his second Best Actor Oscar in two years, couldn’t even begin to transcend the material he was given in Jupiter Ascending, and ultimately hammed it up to little effect. Jennifer Lawrence, who is widely considered to be one of the best actresses of her generation, is painfully monotone as both Katniss Everdeen and Mystique (and those movies aren’t even that bad!). And Johnson’s own co-star, Jamie Dornan, is revelatory (and critically acclaimed) as the opaquely layered serial killer of The Fall, but was blatantly phoning it in as Christian Grey. His performance was cringeworthy, mostly because he himself was very obviously cringing at the material.

I know they supposedly hate each other, but this fan video of Dakota Johnson and Jamie Dornan goofing off behind the scenes looks like a movie I would actually like.

And why wouldn’t he? The material is fucking terrible. Dakota Johnson would have been well within her rights to pull a Kristen Stewart, to perfunctorily sleepwalk her way through this soul-buying franchise in the hopes that the box office returns and notoriety would lead to roles that show off her considerable nuance and range. But instead, she faced the challenge head-on, and added dimension to the most egregiously vapid character since Bella Swan, a character who had no business being anything other than one-dimensional. That’s an Oscar-worthy feat if I’ve ever seen one.

I would never have expected Johnson to actually receive an Oscar nomination, considering the competition from legitimate films; however, her performance should have placed her squarely in the conversation. But just as the Razzies choose a few universally lambasted films and take a bunch of cheap shots, the Oscars pick a few well-liked movies and almost indiscriminately reward everyone involved. Oscar voters brazenly admit to disregarding performances from movies they didn’t like, regardless of the merit of the acting itself; this year, the anonymous voter of THR’s Brutally Honest Oscar Ballot dismissively stated that “[Steve Jobs’s Michael Fassbender [was] out because he [was] in a dopey movie.” And from Ballot No. 2: “I immediately rule out what’s her name from Brooklyn [Saoirse Ronan] because it was quite predictable.”

I would understand if these voters found it difficult to reward actors from movies they didn’t enjoy because the character arc as written simply wasn’t compelling or believable, which makes the credibility of the acting near-impossible to assess (I might make that argument for Brooklyn, as a matter of fact). But the overall quality of the film shouldn’t be the determining factor when deciding the merit of individual performances, and definitely shouldn’t preclude actors from the awards conversation. So as counterintuitive and Dali-surreal as it sounds, I maintain that if the Academy had any more integrity than the Razzies, Dakota Johnson would have been a contender for Best Actress this year.