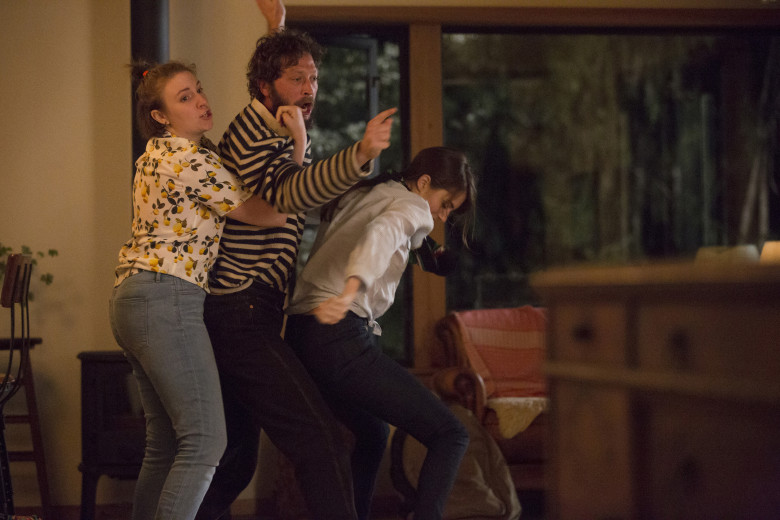 I can’t say enough good things about “Hostage Situation.” It was everything we love about Girls–dysfunctional coming-of-age moments, even-more-dysfunctional female friendships, hilarious one-liners about hipsters and the Pacific Northwest. And on top of all that, the entire episode took the form of a horror spoof that was simultaneously hilarious and terrifying. Not scary in the sense that you think Desi will actually kill anyone, but in the way that you can already imagine Hannah telling the story in hushed tones at writers’ conferences for the rest of her life.

Here’s a ranking of all of the Girls‘ character growth, and trust me, I was as surprised as anyone else by the winner:

I can’t believe that Marnie took first place in an episode that starts with her and Desi back together. Desi is, of course, the textbook example of a lack of character growth, and just an all-around pathetic human being. His platitude for Marnie, who at least feels somewhat badly about cheating on Ray, “If you don’t believe in your goodness, how do you expect anyone to?”, reminds us that he’s not just morally bankrupt, he literally doesn’t understand what morals are.

But Marnie’s growth was remarkable in “Hostage Situation,” mostly because she had so far to go. In the first scenes with Desi, it seems like she’s just repeating all of her most terrible patterns, but there’s a hint of growth when she’s able to say, “I’m a monster.” (Truer words were never spoken, Marn.) Then, that flash of conscience pays dividends in a big way when she discovers that her former ex is addicted to drugs–again.

And here’s the thing: Desi is so profoundly awful, she could easily have blamed their entire breakup on his addiction and newfound penchant for violence. If there were ever a time to deflect blame, this is probably it. But instead, she has another moment of reckoning, and realizes how fucking narcissistic she would have to be not to notice that he was high for their entire marriage. And when Hannah cuts deep with the comment, “It’s kind of hard to have observations about other people when you’re only thinking about yourself,” Marnie takes it in stride, and agrees with Hannah that “we don’t know shit.”

In the end, Marnie ends up in the same place she was at the end of “Panic in Central Park.” She realizes that Desi is an abusive narcissist, that her friendship with Hannah is the most formative in her life (for better and for worse), and that she needs to think about someone else other than herself for a change. We’ll see if it sticks this time, but I have high hopes for Marnie’s arc this season. 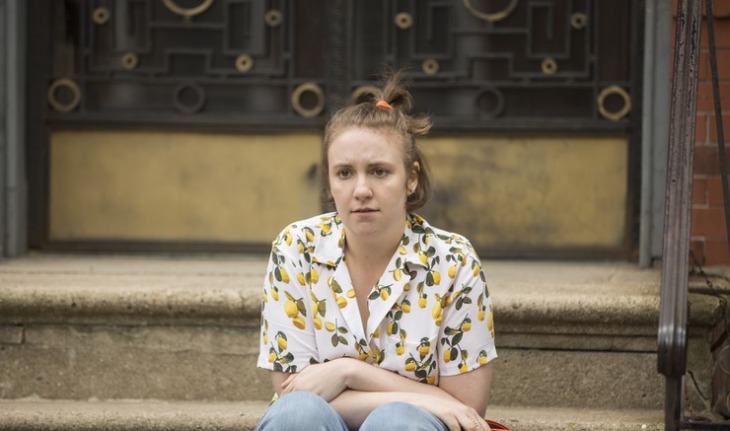 This episode could have been called “This Is What Mature Hannah Looks Like.” She’s finally making a real effort to do some adulting, in the most Hannah-ish way possible. She’s putting bug spray on her genitals, she bats a dangerous home intruder away with a spatula, and she works hard to write an essay about the “last sex cult in Staten Island.” But instead of becoming wrapped up in her own importance now that her career is gaining momentum, she’s finally looking outside herself. She covers for Marnie (although she tells Elijah, who definitely cannot keep a secret), and she spends an entire weekend helping Marnie figure things out (even if she complains about it most of the time).

But most importantly, when Marnie finally comes to terms with her mistakes, Hannah finally does what a good friend does: offers sympathy and insight, judgment-free [Luckily, we aren’t bound to that last one –Nerdy Spice]. Not only was this the first time I’ve believed in Hannah and Marnie’s “best friendship” in a hell of a long time, it also demonstrated a marked shift in Hannah’s character. Old Hannah would have just thrown the self-centered accusation at Marnie, without acknowledging that she herself is the poster child for narcissism. But instead, she had one of her most self-aware moments of the entire show.

“It can be pretty hard to have observations about other people when you’re only thinking about yourself. I would know,” she tells Marnie. “And I’m not judging you, OK? I promise I’m done with that. I’m done judging. I’m done being superior. I’m done acting like I know anything at all. None of us know f*cking anything.”

So, why doesn’t she get first place, even though she went so far as to bandage Desi’s hand for him before throwing him in the backseat? Because of that scene in the antique store, of course. Hannah meets the charming and beautiful proprietor, Parenthood‘s Joy Bryant, who just so happens to be a woman of color. Hannah says she “has never wanted to Instagram a stranger more in [her] life,” and questions why the woman is not “modeling in Dubai.” The storekeeper tells Hannah a far-fetched story about being saved by Chris Noth after almost dying on the third rail, touts the benefits of “living your truth,” and then gives Hannah a pretty tea-set for free, because she’s “psychic” and can tell when a teaset “could save someone’s life.” Magical negro, anyone?

Lena Dunham would probably say that she was trying to comment on the Magical Negro trope, and make fun of Hannah’s privilege and cluelessness. And that may have been the intention, but the scene completely missed the mark, because it didn’t subvert the trope in any way. It would have been funny if Hannah had tried to ascribe some magical quality to the woman, and the woman had contradicted that tired stereotype. But instead, the woman was the one who brought up magic in the first place, and didn’t go on to become a developed, human character. I’ll bet you a million dollars we never see Joy Bryant again, and that I’ll never learn that character’s name. All of the self-aware”teen witch” jokes in the world won’t fix that.

Jessa was in fine form this episode, ruining her grandmother’s birthday video, rudely inviting herself to Shoshanna’s networking event, and making fun of it the whole time in her usual caustic manner. But honestly, I expected her to be a lot worse. She didn’t do anything to directly embarrass Shoshanna, and pretty much everything she said in this episode was completely accurate. Those Jamba Jeans girls were vapid and horrible (Jessa’s description of them as “like Khloe Kardashian or Bethanny Frankel, if they weren’t amazing and visionaries” was my biggest laugh of the episode, her grandmother should use protection “for the sex,” and who the hell does want to go to Aruba?

While Jessa gets the least screentime of all the Girls in this episode, she is clearly starting to realize the full extent of the damage to her female friendships. She alienated Hannah, Marnie never liked her to begin with, and at this point, the only person she really has is Adam. That loneliness is likely why she forces her company on Shosh, who has to deal with it because they’re family. And then, when Shosh and Elijah double-team her and throw her stolen sliders on the ground, she says heavy-handedly, “I have nothing.” It’s obvious, but it gets the job done, and I felt genuinely bad for her this episode.

Because seriously, she didn’t actually do anything wrong! Hannah and Adam had been broken up for a year, Hannah’d rejected him the last time around, and she was in a serious relationship with someone else. Jessa should have told Hannah about Adam earlier, obviously, but that’s between her and Hannah. Many fans are fine with Elijah painting Jessa as the villain, and I understand that impulse, but I think it’s overly judgmental and unfair. 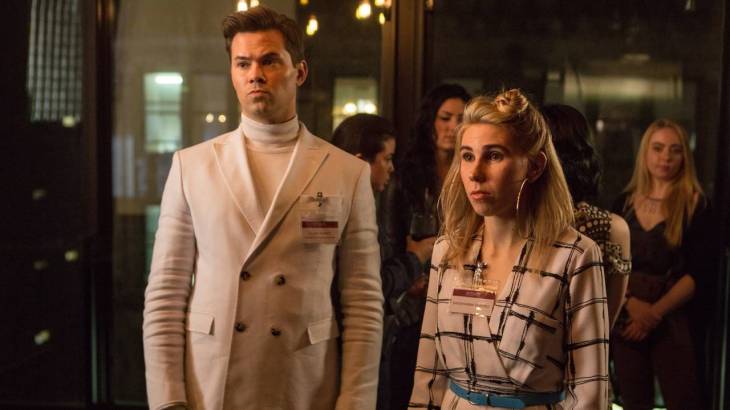 I saw what they were trying to do with Shosh this episode, and in many ways, it was very successful. Shoshanna started off the series as a young, idealistic college student who was destined to take the world by storm. Of all of the Girls, she least represented the stereotype of the directionless, apathetic, overly cynical millennial. Instead, she represented another trope entirely: the energetic, go-getter millennial who is driven to succeed at the next “big thing,” even if that “big thing” is incredibly stupid and/or shallow.

In light of that, it makes perfect sense that she would be jealous of her old college buddies, who “cracked open the market for athletic denim” with Jamba Jeans and went on to found the awfully-titled WEMUN (Women Entrepreneurs Meet Up Now!), which is basically just a place for corporate, privileged women to mingle and eat the “best pigs-in-a-blanket in the tri-state area.” If Shosh is a relatively positive version of a millennial stereotype, Rachel and Ziva are the distilled, monster versions of the vaguely liberal but horribly appearance-driven Facebook generation. Their admiration of Shoshanna’s superiors encapsulates their own business success: “They do nothing and achieve everything and I’m all about that.” Their biggest complaint about Shoshanna, who basically dumped them as friends, is that she made them pay for a hotel in Aruba two ways rather than three ways. And their answer to whether trans women are allowed in the organization–a giggly “We don’t know, okay?”–is pitch-perfect.

But still, Rachel and Ziva are Shoshanna’s people more than the Girls are, because they’re at least trying to be good at life. If their company is stupid (and their acronym is even stupider), it’s still an accomplishment to build a successful start-up at such a young age. Hannah, Jessa, and Marnie are typical New Yorkers who are cynical because that’s safer; it’s easier to point out what’s wrong with something than to acknowledge what’s right with something. They’re so busy being ironic and finding fault with everything, they convince themselves it’s better not to try anything.

The season premiere established that Hannah is trying to overcome this character flaw, when she realized that she and her friends only define themselves by what they dislike, rather than what they actually enjoy. (This attitude shift is helping her writing career as well; her sex cult essay looks pretty pretentious in its way, but at least she’s doing something.) But Jessa is still the living embodiment of this “fuck everything” mentality, and the fact that she was trailing after Shoshanna making snide remarks about everything didn’t help the situation. So it makes sense that Shoshanna would realize that she made a mistake in trying to fall in with Jessa’s crowd, especially when they don’t even like her very much.

But that being said, her blow-up at Jessa seemed completely uncalled for. Shosh is a big girl, and she’s the one who chose to ditch Rachel and Ziva for Jessa and co. When she yells at Jessa because she “convinced” Shoshanna to skip Aruba, it pretty much justifies Jessa telling Shosh to grow up. Granted, Jessa has a tendency to blow in like a hurricane and destroy people’s lives without a thought to the consequences of her actions. But still, Shoshanna can’t blame Jessa for her own choices, or the way her life has turned out. For someone who prides herself on having control over her own life at all times, this seems beneath her.