I have to say, I was definitely a naysayer about Adam and Jessa’s movie, but now I’m a believer. Not in the sense that I think the movie itself will be good; it still looks like a corny and even more twee version of 500 Days of Summer. It checks all the boxes of the worst kinds of indie movies: a manic pixie dream girl (because OF COURSE that’s how Hannah looks from Adam’s perspective), stereotypes about mental illness (“My head feels so noisy, I just want it to stop!!”), a dysfunctional relationship, and a cute yellow sundress.

But I’m on board with the movie as a plot device, if only because it gives us a hilariously meta spoof of Girls‘ early seasons. Hannah clumsily dancing half-naked to an ironically cheerful song, Hannah and Adam being ridiculously melodramatic about their relationship (“I don’t care if you ruin my life, at least you’ll have been in my life”), and Hannah wanting to be treated like shit by a guy, because that’s just so painfully edgy.

But anyway, let’s get to the personal growth rankings:

As I said last week, I’m not a fan of Girls using an accidental pregnancy as a device to propel Hannah into adulthood, if only because it’s far too conventional. But still, if they insist on making Hannah keep this baby, this is the way to do it. She is impressively realistic about her limitations as a potential mother, starting with her hilarious list of reasons it’s crazy to keep the baby in the opening scene. From the expected entries like “I’m only 27,” “I act even younger than that,” and “I’ll probably never see that dad again,” to the more frightening “I once forgot about a guinea pig for six weeks” and “I will make less than 24K this year” (although, for a freelance writer, 24K would be pretty damn good), the entire list was on point. And I can’t neglect to mention the best reason of all: “I AM BAD AT SPORTS.”

There are a few moments in which the old Hannah rears her ugly head, particularly when she admits that if she has the baby, she’s “going to have to start drinking water,” and when she assumes that Elijah will want to raise the child with her, which is a hell of a commitment to expect from a friend. But overall, bringing in Hannah’s mother was the perfect choice for this episode, because her parents’ divorce has matured Hannah more than any other event in the series. The fourth-season episode “Daddy Issues” was the first time we saw genuine growth in Hannah, the first time we glimpsed her ability to put aside her own needs to take care of someone else. Now, in “Gummies,” she wrangles and comforts her mother who is not only vulnerable, but weed-addled, making her nearly as needy and difficult as a child. In the last couple of seasons, Hannah has grown more than any other character in the series, which makes Elijah’s tirade against her all the more cruel.

(But that being said, Hannah could NEVER be Lorelai Gilmore. Just saying.)

If there’s another character who has undergone actual growth in the series, it’s Shoshanna (although I’d still give Hannah first place, just because Shosh didn’t have nearly as far to go). She, like Hannah, is finally starting to suss out who is actually important in her life, and who is unnecessarily toxic. This is great for the character, who is probably too nice to be hanging out with anyone other than Ray, but it also means we hardly see her anymore. Seeing her comfort Ray in her usual chipper, optimistic way was sweet (“I’m just not gonna die, like ever.”), but I’m way past ready to see her in her own storyline again, one where she’s not just a considerate, supportive foil to Marnie.

As clichéd as this movie seems, it was fascinating to watch Jessa and Adam’s competing visions of his relationship with Hannah play out. The memories of romantic relationships are constantly rewritten as a person’s life and perspective changes, especially when it comes to first loves. I’ve seen friends remember that first love as a “soulmate,” that one person to whom they gave everything. Until they have a more mature second love, and then they remember that first love as a naive and often unhealthy exercise in codependence.

But for Adam, Jessa sometimes seems less like that “mature second love,” and more like a first love redux. Jessa and Adam are basically a distilled version of the most intense, potentially unhealthy aspects of the Hannah/Adam relationship. Hannah and Adam both had psychological baggage, but Hannah didn’t revel in hers the way Adam does, while Jessa has a romantic view of her own addictions/personality disorder. Hannah likes weird sex, but Adam still seemed to be imposing his sadistic preferences on her, while Jessa shares his attraction to taboos. And while Hannah and Adam definitely had an intense emotional bond, the love between Jessa and Adam is intense to the point of being all-consuming.

So, in a way, Jessa was right when she objected that she and Adam “are the intense ones.” But, of course, she was also completely wrong. It’s bad enough that Adam has rewritten history to make Hannah the instigator of his sadistic sex acts (let us all remember that painful, possibly non-consensual sex scene between him and poor Natalia), but Jessa’s belief that Adam was “indulging” Hannah by getting rough with her is just plain delusional. And for someone who claims to still care about Hannah, Jessa is all-too-ready to throw her friend under the bus in order to maintain her narrative of her own relationship with Adam.

As I’ve said before, Jessa’s saving grace in the last couple of seasons has been her self-awareness, but that quality is not on display in this episode, when she desperately tries to erase the fact that Hannah and Adam had an emotionally intense relationship. Jessa was the one who said that they should mine their lives for their most potent, painful experiences, but now that she’s coming face-to-face with the fact that Adam loved someone else before her, she’s extremely petty (par for the course) and unusually insecure. Needless to say, it’s not a good look for her. 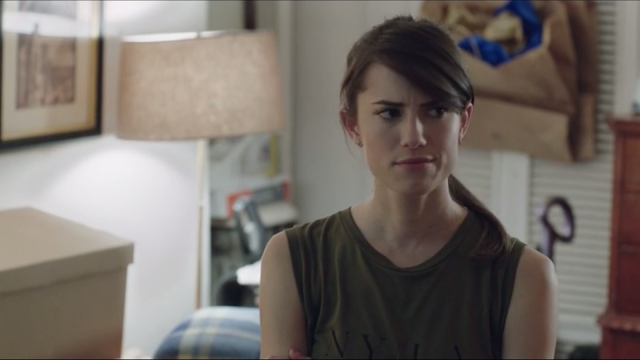 I’m honestly not really sure what they’re trying to do with Marnie. It would have been unrealistic to expect that her epiphany in “Hostage Situation” would lead to genuine introspection and self-awareness, but they’re taking the whole “one step forward, one million steps back” a little too far with this character. After all that, after it finally seemed like she was making progress, she’s as monstrous as she’s ever been.

And that still would be fine, since people often don’t grow all that much in real life, except that she’s becoming even more of a caricature. She manages to be supportive for approximately three minutes (“more like forty minutes,” to be exact) while Ray mourns his dead friend before passive-aggressively bailing on him for her Physique 57 class (which is really, really different from her “quiet pilates” class). She makes obnoxious cracks about the state of the house, and can’t even muster a shred of sadness when Ray (finally) dumps her. Ray gets all of the maturity points this episode, while Marnie is an even more cartoonish version of the girl who serially fucked Charlie over.

Elijah starts out this episode his classic hilarious self, inappropriately telling Hannah he  “couldn’t be happier for Ray,” purportedly because Ray inherited the coffee house, but really because Elijah is flying high on Adderall. He has an existential crisis (or as close as any of these characters could have to an existential crisis) because an old a capella friend with ugly nieces is the new lead of Kinky Boots.

But then, his ugliest side comes out when he finds out that Hannah is pregnant, a side so ugly that I had forgotten it was even there. Like I said before, it’s a little ridiculous that Hannah assumes Elijah wants to be her Uncle Jesse, but Elijah wins the horrendous selfishness award this week, hands-down. He makes Hannah’s pregnancy all about him, complaining that she’s going to be a “boring single mother” and that she’s going to ruin their fun NYC lifestyle with “some baby.” And when she rightly responds to his “You’re not ready for this” with “No, YOU’RE not ready for this,” he says something damn near unforgivable: “You’re going to be a terrible mother.”

Now, to be fair–he’s probably right. But only I get to say that.

See you next time!