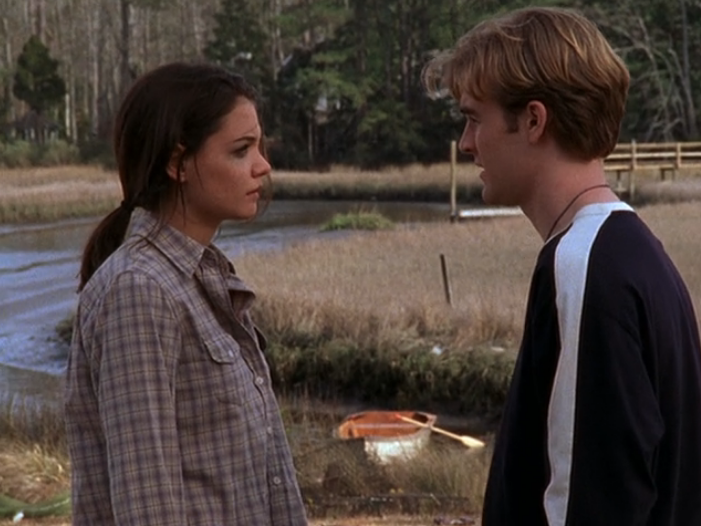 We’re rewatching all of Dawson’s Creek in honor of its twentieth anniversary. Will require some mind-numbing. Drinking game rules can be found here.

This episode chooses Dawson’s Creek’s favorite theme—people changing—and hammers it absolutely to death. Dawson’s final film assignment (and a highly unrealistic one, by the way, or at least one that indicates the high school is total crap – who gives a shit about drawing parallels to real life in a real film class?) is to compare a character arc from Casablanca to one from his own life. So basically, his plotline is itself a meta reference. Shot!

Dawson, of course, decides to make a movie instead of actually doing his homework. Shocker. He wants to use Joey as his subject because she’s gone through changes this year (Another shot!) but Joey tells him to “Find another sucker… subject.” Hee. (After much badgering by Dawson, Joey agrees to say one thing on camera, lets him wait in suspense for awhile, then says: “Good luck.” Hee again. This episode is witty!)

So Dawson goes to school in search of other suckers. First, Jen: “By all means, let me reveal my deepest, darkest, most intimate secrets of the past year for your homework assignment,” she agrees sarcastically. The next person to turn Dawson down is Jack, who politely says that today’s not a good day. I almost can’t believe Dawson was trying to use Jack’s coming-out story for his video assignment, except, of course he was.

Finally, Dawson asks how Pacey managed to change his life. He says that Pacey is the “classic hero who changes for the love of a woman,” with that combination of irony and sheer patronizing obnoxiousness that is his trademark. But Pacey just keeps saying in a mopy voice that his only accomplishment was to find Andie. Dawson finally realizes that Pacey’s actually going through something and, wonder of wonders, puts down his camera and tries to be a friend to Pacey.

Speaking of whom, he is dealing with his own situation after Andie’s breakdown in the previous episode. Jack calls his and Andie’s horrible dad because he thinks Andie needs help. Mr. McPhee declares that they’re leaving Capeside post-haste, which makes everyone flip out. They try all sorts of schemes to convince Mr. McPhee not to make Andie leave, including Pacey begging that his life is nothing without Andie or something (shot!). Finally Mr. McPhee gives Andie the choice, and she realizes that she needs help badly enough that she does need to leave, despite Pacey. The two share multiple extremely dramatic goodbye scenes, and Andie finally leaves with her dad. But Jack decides to stay. And since Jen, who had a whole side plotline about wanting to move in with her parents and being rejected (pity party for Jen! Shot!), also needs a place to stay, they move in together.

Finally, Dawson finds his subject: Mr. Potter, who’s busy on a construction project in the restaurant with Joey. He agrees to star in Dawson’s project in exchange for Dawson doing construction work on the restaurant, although it turns out Dawson is terrible at it. Mr. Potter gives a solid interview all about how embarrassed he is for his past failings and how much he’s changed. (Shot! Also, Joey gets sad and leaves as soon as he mentions her mother—dead mom card shot!) Joey, uncomfortable with Dawson’s interview with her dad, says he’s being intrusive by making his dad relive such a painful time. “That’s the heart of the piece,” Dawson answers. Which… isn’t exactly a defense. Somehow this turns into a discussion of Dawson being afraid he’s not enough for Joey and she’s going to grow out of him. Well… give it about twenty more episodes, and, yeah. That pretty much happens.

So Dawson’s project seems to be going well, but, TWIST! Mr. Potter hasn’t changed at all. Dawson totally catches him doing a drug deal right there in the restaurant like a big idiot. And he’s so obvious about it that even Super Square Dawson recognizes what’s going on! In the end, Dawson’s final essay is that maybe people don’t change. (Shot!) He argues that Bogart’s character doesn’t really change, just reveals what’s always there. You think it’s about Mr. Potter, but, spoiler! It’s still about Dawson. “If Bogart really wanted to change he wouldn’t have sent his love away. He would’ve held on to her for dear life,” claims Dawson, who clearly didn’t grasp the whole fighting-Nazis part of Casablanca. (5 shots!)

When Dawson agrees to help out with construction, Mr. Potter hands Dawson what appears to be a giant level. Joey returns to find Dawson holding it in puzzlement and laughs at him. Heh. 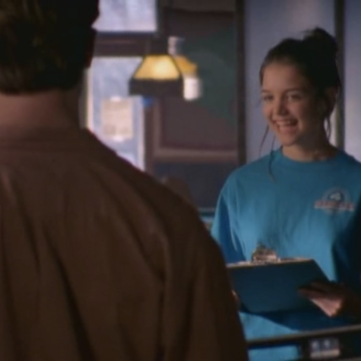 I love all the gentle laughter around Dawson’s utter lack of practical skills. While struggling over the Potters’ construction project, Dawson leaves to set up his camera and Mr. Potter finds Joey staring dubiously at Dawson’s handiwork. He says, “Oh, well that’s not going to work.” Joey nods ruefully and says, “I know. Don’t say anything.” Made me laugh so hard! Early in the episode, Dawson is incompetently attempting to hammer a nail into some wood when Joey throws her arms around him and gives him a big kiss on the forehead, complimenting his “macho working man thing” as a “definite turn-on.” Oh, gross. Shot for the completely unwarranted compliment. It only gets grosser when Joey suggests he change into a tight T-shirt and a leather jacket.

Gotta give the writers props. I didn’t catch a single one! Instead we were witness to correct usages of words such as “histrionics” and high-quality repartee throughout.

Twenty shots! Most of them are the above-mentioned hammering of the “changes” theme, plus five for the awkward Casablanca references, and one for each scene where Dawson asks Jen, Jack, and Pacey how they’ve changed.

This is a momentous episode. Not only is it a fantastic season finale (not transcendent like the first season’s, but satisfyingly soapy), but it’s also technically the last episode that Joey and Dawson are ever officially together. And–minus a couple of nostalgic, bittersweet callbacks–it’s also the last episode to include the standard opening of D/J watching a movie in Dawson’s Spielbergized childhood bedroom.

This might be the most finale-ish of the season finales (until “All Good Things… Come to an End”: the finale to end all finales). Betrayals! Break-ups! Arson fires! Weirdly specific teen suicide statistics! And each character gets a very characteristic plotline: Pacey finally stands up to his abusive father, who treats him like a black sheep (shot!), Jen spends the whole episode feeling sorry for herself as loudly as possible (shot!), and Dawson and Joey find a reason to break up yet again–this time because Dawson sends Joey’s father back to prison. (Fair enough.)

In true Dawson’s fashion, “Parental Discretion Advised” highlights genuine, organic problems in the D/J relationship, but manages to do it in the soapiest, most contrived way possible. After Dawson caught Mr. Potter dealing drugs in the previous episode, he struggles with whether to turn him in or not. Then, when Mr. Potter’s competitors set the Ice House on fire, Dawson realizes that his hands are tied, and he tells first his parents, and then Joey, that they need to turn Mr. Potter into the police. Joey is furious at Dawson, and blames him for her guilt when–in a ludicrously implausible turn of events–she wears a wire with her father and sends him back to prison. She then dumps Dawson in spectacularly coldhearted fashion, and they never quite manage to fix what was broken.

To be as generous as possible, I can almost see how the writers thought this would be an interesting, nuanced way to break Dawson and Joey up. Joey is trying desperately to preserve her family unit, especially after Abby’s death forced her to let go of her mother’s memory. Dawson feels like he has no choice but to turn Mr. Potter in, because he’s afraid for Joey’s safety. These external motivations feel realistic (within this very unrealistic situation), as does the more internal conflict between Dawson and Joey: as Joey tells Dawson, she sees things in gray, while he sees things in black-and-white. (For once, an accurate assessment of Dawson’s character. – Nerdy Spice)

But here’s the thing: the external and the internal do not match up at all. Dawson doesn’t feel like he has no choice because he “sees things in black-and-white” (although he totally does), he actually has no choice. Joey easily could have died in the Ice House fire–almost anyone who cares about her would have done the same as Dawson in that situation. It’s so obvious that Dawson is doing the right thing for once that even Joey admits it in the end (even if she kind of hilariously lobbies it as an insult).

As a result, this huge, emotional break-up doesn’t pack as much of a punch as it could–or even as much as the wonderfully written dissolution in The Dance–mostly because it feels so very contrived. And there’s really no reason for this to be the case; even putting our animosity towards Dawson aside, there are almost always organic reasons for a couple to break up. The writers clearly wanted to make this seem like a tragic, timing/circumstances-related break-up (see the ridiculously on-the-nose meta-commentary in the teaser) so that we would all still believe that they were star-crossed lovers who are meant to be together in the end. But it would have been much more interesting–and potentially more sustainable in the long term–if they had broken up for character-driven reasons that they each had to overcome before they could end up together in the end. As it stands, Dawson and Joey are exactly what the writers wanted them to be: star-crossed lovers who usually only get to end up together if they both die around the same time.

Which brings us to:

That scene where Joey wears a wire strains credulity, even for a teen soap. But I’m still going to pick that scene as the highlight of the episode, just because Katie’s performance packs such an emotional punch. Especially her delivery of the line, “I trusted you. And you lied. And you ruined everything Bessie and I have worked so hard for.” Chills!!

Everything having to do with Jen’s half-baked suicide plotline, but especially that moment when she’s just staring into the flames. Joey’s father is literally about to die, your friends are getting ready to risk their lives to get him out, and best-case scenario Joey’s livelihood burns to the ground. Does EVERYTHING have to be about you, Jen???

This finale’s music isn’t quite as epic as the first season’s (how could it be?), but it still hits it out of the park with “That I Would Be Good” by Alanis Morissette, which plays while Jen and Jack move in with Grams and start their own little family.

Like all truly classic episodes, the shot count is pretty high: 12, six for the woefully inaccurate Edith Wharton reference, four for Jen’s many, many pity parties, one for Pacey’s black sheep complaints (it would be higher, but his father is so evil that his angst feels pretty earned), and one bonus shot for all of this “hero” nonsense.