Better Call Saul! Who knew that was the name of his intro episode?

Summary: Badger gets busted by an undercover cop, played by (hilariously) DJ Qualls. We’re introduced to fast-talking, unscrupulous lawyer Saul Goodman, who represents Badger and encourages him to turn in Heisenberg for a better deal. Walt and Jesse try to bribe him with $10,000, but he doesn’t take it, because it’s “a little low.” (HA.) They kidnap him and try to threaten him, but he immediately pegs them as amateurs, and gets them to hire him as their lawyer to get confidentiality–which they really should have just done in the first place. Saul hires a career criminal to pretend to be Heisenberg and go to jail in Walt’s stead. In the end, Saul tracks Walter down at his school and offers to take his burgeoning drug career to the big time.

Saul’s bench ads, which are visible in the very first shot of the episode. 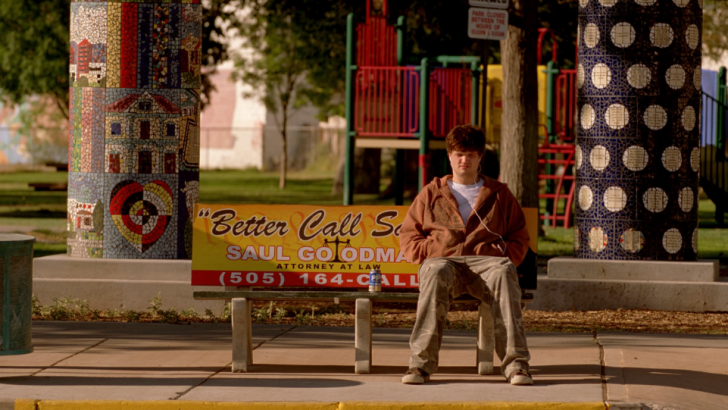 Saul’s hilarious infomercial, which sounds like a used car salesman commercial and inexplicably has Yankee Doodle playing in the background.

Saul’s introduction, and just Saul in general. I totally understand why he got his own spin-off, he’s by far the liveliest creation to come out of Breaking Bad. He’s one of those rare characters who comes in late, and yet immediately feels integral to the DNA of the show. I actually wish there were more of him–he provides the levity necessary for such an inherently ridiculous premise.

Saul walks into DJ Qualls’ interrogation of Badger and says, “Which is which?” I LOLED, so funny.

The constitution plastered on the wall of Saul’s office.

Hank’s meltdown. I genuinely felt for Hank when he was trying to seem fine in front of his coworkers, even though he can barely get out of bed, and when he said he couldn’t see a shrink, or he would ruin his career. This might be the first meaningful critique of toxic masculinity in this show.

Another good one! Saul’s presence is so strong here, it almost feels like a standalone, like a backdoor pilot for his own spin-off (which it was, eventually).

The scene with DJ Qualls at the beginning, where Badger keeps asking if he’s a cop. It’s funny, and the payoff is good, but it’s way, way too long. The editing is off somehow–it feels like it goes on for about twenty minutes.

Hank is basically Batman, so good are his detective skills. From an outsider’s perspective, there’s really nothing weird about their Heisenberg sting, but somehow Hank knows something is up. How? Unclear–just because the engine of the show requires that he have amazing spidey senses (to mix my comic book references).

Next week: the focus goes back to Walt, with decidedly more mixed results.