We pick up right where we left off: Buffy is fighting with Kendra, who claims that she’s also a Slayer. They agree to a detente, and with Giles’ help, they figure out that Kendra was called when Buffy died for a few minutes in “Prophecy Girl.” Twist!

Kendra is the complete opposite of Buffy–bookish, super serious, and diligent about following orders to the letter. As Buffy puts it, she’s the “she-Giles.” (Buffy also gets all jealous that Giles might like Kendra better than her, which is sibling-like and cute.) It turns out that Kendra attacked Buffy because she saw her kissing Angel, and assumed she was a vampire. Which, fair. Once they’re all on the same side, Buffy figures out that Kendra has locked Angel up at Willy’s, and goes to save him. But by the time she gets there, Willy has already sold Angel down the river to Spike, who wants to use him for a ritual that would kill Angel and revive Drusilla from her mysterious mob disease.

Buffy is gung-ho about saving Angel, and Kendra is confused about why anyone would care about saving a vampire. The conflict between Buffy and Kendra’s diverging Slayer styles comes to a head when Kendra insists that they return to Giles for orders after finding Angel’s location. Buffy refuses because Angel “could die,” and Kendra says he’s a vampire, and he “should die.” Which is insensitive, yes, but in Kendra’s defense, everyone did a really terrible job of convincing her that Angel is good now. Would it really have taken that long to explain that he has a soul?

Anyway, Buffy goes to find Angel alone, and Willy leads her into a trap. Luckily, Willy is so incompetent, his “trap” takes her exactly where she needs to be: the church where Spike is doing the ritual. Angel is tied up and slowly dying as Drusilla saps his strength away from him, and Spike orders a human member of the Order of Terraka to kill Buffy. Kendra arrives to save her just in time, and together they defeat Spike and rescue Angel just as the church crumbles around them. They weirdly assume that Spike and Drusilla are dead, even though they all understand that vampires can’t die from being crushed by debris, so it’s no surprise when they’re actually alive. It’s slightly more surprising that the ritual actually worked–Drusilla is strong now, which is fun. 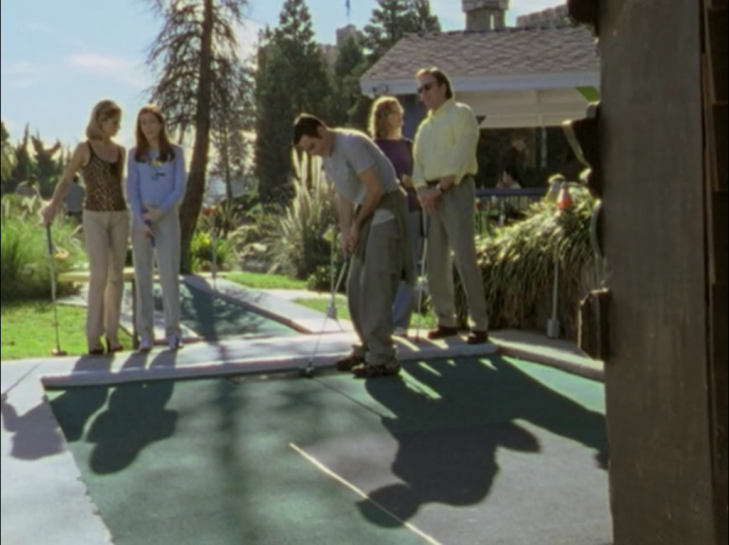 Mrs. Buffy continues the trend of being completely unable to make good decisions by bringing home a teddy bear of a new boyfriend named “Ted.” He sets off Buffy’s spidey senses almost immediately, but everyone else, including Willow and Xander, is totally charmed by his cooking skills (and his ability to give Willow tech gear at a low cost). Buffy takes out her aggression on some redshirt vampires. She also complains about Ted to Angel, who then impatiently says, “So are you going to talk about something else at some point?” Um, rude!

Ted takes everyone to mini golf and everything is hunky dory until he catches Buffy cheating (which, seriously, Buffy?!) and goes into a full-on abusive tirade when everyone else can’t hear, about how “right is right and wrong is wrong.” Given what happens later, I feel like we’re supposed to think that his obsession with black-and-white morality is related to the fact that he’s a robot. But, like. She cheated!!!

Anyway, no one believes Buffy. She investigates Ted and finds out that he’s telling everyone at the company he’s engaged to Mrs. Buffy. Then, after a tense family dinner, he shows up in her room reading her diary. He tries to use her supposed psychiatric delusion of being a vampire slayer to blackmail her into supporting his relationship with her mom. When Buffy tries to prevent him from leaving, they get into a fight… and Buffy kills him. Whoa.

Mrs. Buffy is understandably a little gobsmacked by this development, but manages to pull herself together long enough to lie for Buffy and say that Ted fell. But Buffy confesses, and tells the police that she hit him after he hit her, but didn’t mean to kill him. She feels completely horrible and wonders if she’s a terrible person–and even Xander and Willow are shocked when they realize that Ted wasn’t a demon. “He was a person,” Buffy says sadly, “and I killed him. I’m the Slayer. I had no right to hit him like that.” It’s so dark!

Luckily for Buffy, this is all moot. Ted totally comes back to life and comes to her room again, only this time she gets him in the arm, revealing his robotic control panel. Because he’s a salesman! But like, a salesman demon. He starts short-circuiting, but locks Buffy in her room long enough to convince Joyce that he’s just a human who wasn’t really dead after all. She finally spooks when he suggests they run off together to get married right away. He knocks her out too, but then Buffy breaks out and finally gets him in the head with the cast-iron skillet he used to make his mini-pizzas.

Meanwhile, the Scoobs have figured out that there’s some kind of happy drug in Ted’s cookies, because Willow can use a high-school-lab-quality microscope to identify specific molecules. (For some reason this makes Xander think that it clears Buffy of being a scary violent person, even though Buffy didn’t know that Ted was putting drugs in the cookies.) They break into his house and find his first four wives in a closet (luckily we’re not treated to this sight). So he’s a serial-wife-killer salesman robot.

Also, Giles tries awkwardly to talk to Ms. Calendar, and she explains patiently to him that she was inhabited by a demon and sometimes people need time and space to get over their trauma and not be bugged every other day by their ex. She does follow him to the graveyard to talk more, only to get attacked by another demon. Whoops. Luckily Ms. Calendar gets ahold of a crossbow… and shoots Giles. Then Giles pulls the arrow out of his own back and stabs the vampire. Well played, Giles? I guess? He is next seen making out with Ms. Calendar in the library.

Meanwhile, Xander and Cordelia discuss how they’re not going to tell anyone that they kissed (while Xander has a mouth full of cookie crumbs, by the way). Then they go to a utility closet to make out. Squee! I love it. 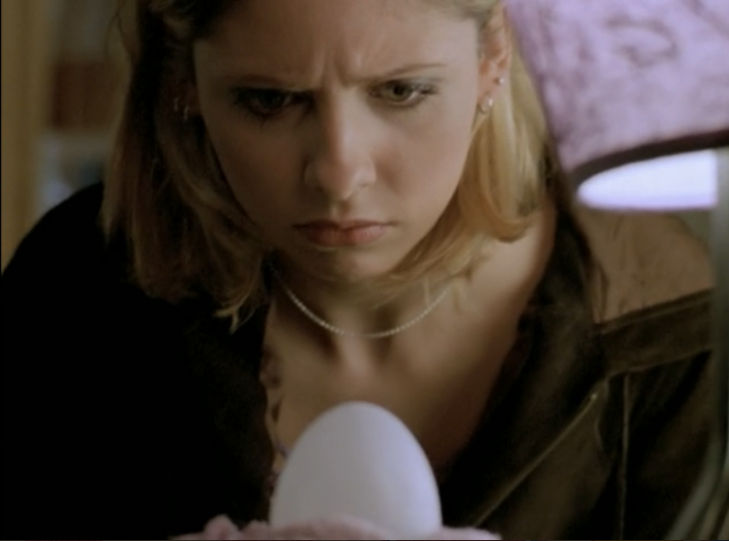 First off, did kids ever actually have to take care of an egg like it was a baby, or can we file this under “things that only happen in 90s WB shows”? By the time I took sex ed, it was a robot baby with a defective sensor that cried for an entire weekend (which, to be fair, taught me a hell of a lot more about how demonic newborns can be).

Anyway, Buffy and friends are doing this project just as all of their hormones are running wild. Xander and Cordelia are making out in broom closets and insulting each other and generally being adorable, and Buffy and Angel can’t make it through two minutes of “patrol” without kissing as loudly and smackily as possible. Joss punishes them all for these urges, as he is wont to do, by making their symbolic eggs actually hatch into something: namely, these truly disgusting demon-parasites:

More specifically, Buffy’s hatches into this worm-hand thing, and it attaches itself to her face like a chestburster and sucks the life force out of her for a night. (And then it inexplicably retreats back into the egg and like–glues the eggshells back together? It’s intact the next morning, at any rate.) Buffy and Willow are both suspiciously tired in the morning, while Xander is flying high because he boiled the egg to prevent it from breaking. (“You boiled your young?” Willow asks, scandalized. Hee.) That night, Buffy’s egg hatches into a full-on demon scorpion thing and tries to attach itself to her back, but she uses her Slayer reflexes to stab it to death. She calls Willow to warn her, and Willow reassures her that her egg is behaving normally, but then we see that her egg has actually hatched and she has the dead-eyed stare of body-snatcher thrall. Eek!

Everyone else’s eggs seem to be normal, so Buffy assumes that hers was a trap set by the Gorches, a pair of over-the-top redneck vampires that we get way too much of. Do I care about seeing them tussle in a sewer without any of the other cast members? No. (It is funny when the older one says, “I’m gonna beat you like a redheaded stepchild,” though.) But then, Xander goes to eat his boiled egg for lunch, and finds a curled-up boiled demon-scorpion fetus instead! Ew!!

Buffy brings the fully-hatched dead one to the science lab so Willow can dissect it (ewww this is definitely one of the grossest episodes), but Willow and Cordelia–who both have bugs attached to their spines–end up knocking out Buffy and Xander and dragging them into the broom closet. Also, Joyce comes to the school to pick up Buffy, and Giles plants a bug on her. Everyone who’s been body-snatched walks robotically to the basement, where a gigantic, slimy pink demon is pulsating beneath the floor. Ugh.

It turns out that the eggs were laid by this demon, called a bezoar, and then the baby bezoars attach to everyone’s spines and control their motor functions and make them slaves to the mama bezoar. The Gorches find Buffy just as she’s about to fight the bezoar, so they end up fighting off all the bezoar zombies together while also fighting each other. The bezoar ends up eating the younger Gorch brother, and the older one keeps trying to kill Buffy until the bezoar opens its giant single eye, wraps a slimy tendril around her legs (yuck!) and drags her underground. Buffy grabs a pickaxe on the way down, and a few loud minutes later, she emerges, covered in the bezoar’s black blood. The remaining cowboy skedaddles.