Janes (a True Stan) and Nerdy Spice (a New Fan) are watching all of Buffy together and comparing notes. Warning: May contain spoilers for later episodes.

It’s Halloween in Sunnydale, which means it’s time for Giles to insist that nothing ever happens on Halloween, only for something to happen on Halloween. In this case, Buffy and friends attend a haunted house at a frat (always a terrible idea) which, thanks to some ill-placed decorative occult symbols, becomes an actual haunted house. It’s pretty similar to season two’s “Halloween,” where everyone transforms into their costumes–in a great way.

Like that excellent episode, the haunted house doesn’t just turn all of the fake creepy crawlies into real creepy crawlies (sorry, Nerdy Spice!), but also preys on the characters’ deepest fears about themselves. Xander is insecure that his friends are growing out of him because they’re in college and he’s not. Buffy is moping around about Parker, and the rejection has triggered fears that everyone will eventually abandon her. And Willow, who is quickly progressing as a Wiccan, is becoming afraid of her own power. (Which is, um, a reasonable fear, as it turns out!)

All of these fears manifest in the haunted house, as well as the growing rifts within the friend group. The gang quickly realizes that something is amiss–windows and stairs and closets are shifting and disappearing like the Winchester Mystery House, a plastic skeleton stabs Buffy in the back, and then turns into plastic again. Buffy tries to sideline her friends because, as Xander puts it, she’s been “push-away girl” lately. Willow insists that she has something to contribute, and offers to do a guiding spell. When Buffy points out that Willow’s spells are “50/50” at best–which is kind of mean!–Willow shoots back, “I’m not your sidekick!” Yikes.

But the saddest moment of the episode unexpectedly belongs to Xander. After Buffy and Willow’s fight, he realizes that no one can see or hear him, a manifestation of his fear that he’s “invisible” to his friends. And he’s totally right that they view him with contempt–no one notices that he’s gone for like, ten full minutes, and when Buffy realizes, she’s not worried, she just says, “That is so typical of him.” But the craziest thing is that Xander himself doesn’t even notice. On rewatch, you can tell that he actually becomes invisible right when they walk into the haunted house, and neither he nor the viewer blink an eye when no one responds to his stream of silly jokes, his efforts to peacemake between Buffy and Willow, or his attempt to comfort Buffy after the fight, because that’s just the natural order of things. I hate Xander, but–that’s rough.

Once they’re all split up from each other, the house ramps up its psychological torment. Willow’s cute little guiding spell goes awry and starts attacking her, a severed head tells Xander that his friends all ignore him, and zombies attack Buffy while telling her that everyone will eventually abandon her. They all end up in the room with the original occult symbol, and Willow figures out (from a book that just happens to be lying open on the table, and is written in Gaelic, don’t think too hard about it) that the symbol summons a demon who “feeds on fear.” Buffy accidentally brings forth the fear demon by destroying the symbol, which looks terrifying in the Gaelic book. But once they actually bring the demon forth, it’s super tiny and non-threatening, and Buffy stomps it out under her cute white sneaker. Ha! Funny, and symbolic! 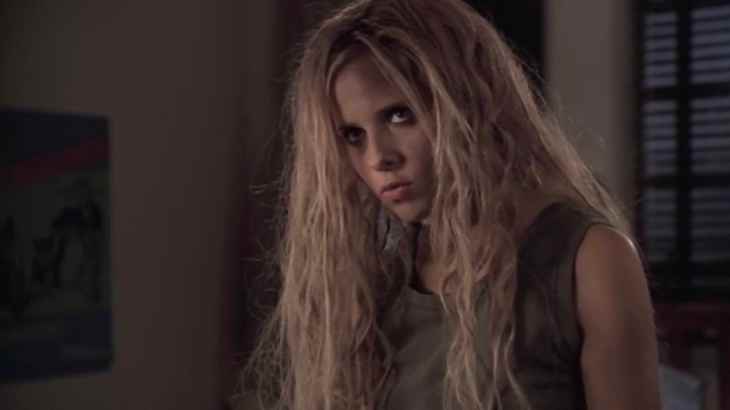 According to Janes, this episode is very unpopular in the fandom. It’s definitely silly, but I actually don’t think it’s that bad–I mean, it’s a bit silly, but it’s more or less a classic monster of the week, right?

Anyway, the events are fueled by the fact that Buffy is, inexplicably, STILL hung up on boring old Parker after like three dates. She’s moping around, wondering if he just liked her too much, and generally acting like a dummy. Even more unwise, she accepts a beer from a group of guys who correctly identify her as being “sad and alone,” just to make herself feel better that Parker is hitting on someone else in front of her. YIKES. Her hangover makes her act pretty weird, like eating someone’s sandwich out of their hands during class. She joins the boys at the pub again the next day and gets drunk on the bar’s special beer again. No one says the word microbrew because it’s only like 2003, but it’s a beer that’s brewed specifically by this pub.

Unfortunately, the beer brewed by this pub is — as the episode title so cleverly gives away — BAD. It turns the guys into Neanderthals. Xander, who’s started working at the bar (and is experiencing a lot of Good Will Hunting level student-on-townie bullying from its patrons), gets clocked over the head with a club and has to chase them off with his lighter. Then he finds out that his boss, angry at always being treated like crap by the snobby patrons, brewed the beer specifically to have this effect. But don’t worry, it goes away in a day or two!

Once they’ve been scared off the premises, the boy cavemen go and find an unconscious girl and drag her back to their lair (the basement of the bar). Cavewoman Buffy, on the other hand, goes into a kind of Parker-related trance and starts drawing pictures on her wall while wearing thick eyeliner for reasons unspecified. When Xander and Giles try to keep her from doing any damage, she runs away and, of course, they are not really equipped to stop her.

Meanwhile: Willow and Oz have problems of their own. Oz has become weirdly obsessed with a band whose lead singer, Veruca, is all sexy and wild. Jealous, Willow becomes distant. Then when she sees Parker she yells at him for what he did to Buffy, only to have him try to turn the charm on her! But Willow has too much sense to be taken in by that and laughs in his face. Unfortunately, all this took place in the pub, so the two of them get knocked out by the returning cavemen.

Buffy ends up in the pub, where the cavemen have set the place on fire and now don’t know how to escape. Parker and Willow are still unconscious. Buffy recognizes Willow despite her atavistic state, and somehow manages to summon the know-how to get everyone out of the window. But later, when she runs into Parker–who actually does want her back now that he’s seen her being such a badass–she’s still a little under the influence of the Bad Beer, and knocks him out with her big cavewoman stick. Heh.

We open on Buffy slaying a vampire, and throwing out some not-quite-Slayer-worthy puns. (“Heartburn”? Really?) Anyway, then we pan upwards, and we see… Spike! Yay, Spike is back! He starts an epic speech threatening that the “Big Bad” is back, but then is immediately tased and captured by a bunch of commandos. Hee.

But the A plot belongs to Oz and Willow, who are so cute and happy that you just know something terrible is about to befall them. Oz is still drawn to that singer, Veruca, and basically drools over her right in front of Willow. Buffy assures Willow that it’s okay to have a crush in a relationship–which is very mature and true!–and it doesn’t mean that Oz doesn’t love her. But then, that night, Oz turns into a wolf, and ends up fighting (or “fighting”) with a girl werewolf, who obviously turns out to be Veruca. Oops.

It turns out Veruca is a veteran werewolf, not a newbie, tortured one like Oz. She thinks that Oz is “domesticated” because he locks himself in a cage, and gives overwrought speeches about how Oz is always the wolf, and the human face is “just his disguise,” and they should feel sorry for everyone else because they don’t know how it feels to be “alive” like they are. Ugh. I hate this girl.

Willow starts to notice that something is wrong, but instead of talking to her about it, or telling Buffy that there’s a killer werewolf on the loose, Oz takes matters into his own hands. Literally, as it turns out–he invites Veruca to spend the night in his cage, “so she won’t hurt anyone,” but then when she arrives, they immediately start making out.

Willow finds them naked together in the morning. Oz tries to insist that he had “no choice” but to sleep with her, but Willow, smart girl that she is, sees right through this. “You could’ve told somebody! Your solution is to lock you two together in a room all night?” Then Oz tries his ace in the hole–bringing up her cheating with Xander. I really hated Willow for that, but it’s obviously a rationalization, and she shuts it down immediately. Good for her. Then she accuses him of being attracted to Veruca even before he changed into a wolf: “You wanted her, like–in an animal way? Like, more than you wanted me?”, and he doesn’t deny it. Oof.

Willow is heartbroken, and for the first time, we see just how difficult it is for her to cope with grief. She gets super depressed, and even walks right in front of a car. Riley saves her in the nick of time, and she tells Buffy everything that’s happened. Buffy wants to help her deal in healthy ways–chocolate, sleepover, etc–but Willow tells her to go after Veruca. Willow almost puts a curse on both Oz and Veruca (!), but then decides against it, right before Veruca attacks and tries to kill her. Oz arrives, and Veruca tries to convince him to kill Willow, because she’s the reason he’s caging himself. “You’re an animal,” she says, grossly. “Animals kill.” He takes that literally, and once they’ve both turned into wolves, he kills Veruca–pretty gruesomely!–by biting her in the neck.

The next day, Willow finds Oz packing his bags. (Um, was he going to say goodbye??) He tells her he has to leave, because “the wolf is inside [him] all the time,” and he shouldn’t be around her, or anyone else, until he figures out how to control it. Willow asks, already crying, “Oz, don’t you love me?” and he says, voice cracking, “My whole life, I’ve never loved anything else.” Ugh, it’s so sad! Then he packs his car and leaves. Bye, Oz! I really will miss you.