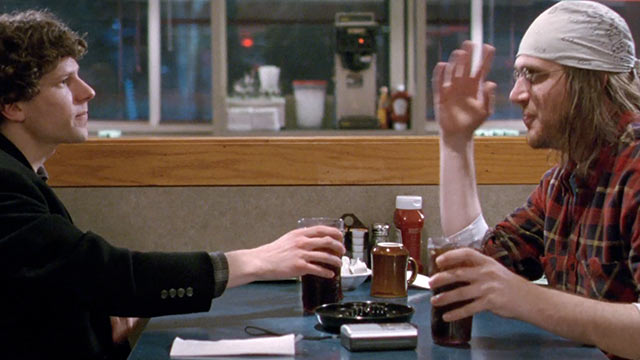 The End of the Tour was never going to escape the David Foster Wallace mystique; the famously expansive author has become paradigmatic of the “tortured artist,” to the point that his literature is now almost inextricable from the tragedy surrounding his life and death. He was (it already seems hard to remember) a flesh-and-blood man, but for better and for worse he embodies an archetype in American culture: the misunderstood genius, the voice of an alienated generation, the lotus flower who was too pure to stay mired in the crudities of this world for very long. 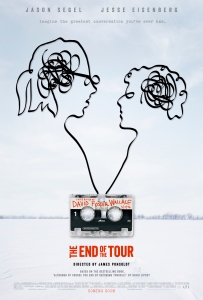 One might expect that a biopic about Wallace’s life would be the worst kind of pandering to this dehumanizing abstraction. But the premise of The End of the Tour — David Lipsky’s five-day interview with Wallace during his promotional tour for Infinite Jest — had the potential to circumvent the seemingly inexorable conflation of the man with the myth. Since its scope was so narrow, it could have been, at its core, a character drama, a film about two strangers talking to each other, with all of the tension, intimacy, and dishonesty that that entails. This premise is not only more elegant and streamlined than a traditional biopic, but more humble, as it would only claim to represent Lipsky’s limited view of Wallace, rather than presuming to depict a person in his entirety. This was, at the very least, director James Ponsoldt’s intention while making the film:

“This is David Lipsky’s very, very subjective take of his time spent with Wallace,” Ponsoldt told AV Club. “It’s his story about spending a few days with David Foster Wallace, who was a stranger to him, and about how Lipsky was affected by that time.”

Ponsoldt claimed that he had no interest in rehashing the final, openly tragic year of Wallace’s life, that he was keen to render a holistic image of Wallace while he was in his element, reaping the rewards of years of hard work, still a dozen years from the decision to take his own life.

And within the confines of the two Davids’ claustrophobic interview, The End of the Tour works on this level. But that success is severely marred by the film’s unnecessary and borderline distasteful framing device, which places the spotlight on (what else?) Wallace’s suicide. By using his final act as a preface, the filmmakers filter the entire film, not to mention all of Wallace’s dialogue—lifted verbatim from Lipsky’s transcripts of their conversations—through that one aspect of his life and legacy. While the characterization of Wallace is as nuanced and restrained as one could hope, the opening scene still renders the proceedings unnecessarily maudlin. (“Unnecessary” being the operative word, as the pall of Wallace’s suicide was going to hang over this film regardless of whether it were explicitly referenced on-screen.)

This tendency to (almost cutely) wink at Wallace’s suicide recurs in small choices throughout the film, starting with the altered title. Lipsky’s memoir/transcript is called Although Of Course You End Up Becoming Yourself: A Road Trip with David Foster Wallace, taking its title from a direct quote by Wallace, and thereby making clear Lipsky’s intention to relay their conversations as faithfully as possible, in the hopes of indirectly exploring the person Wallace has become. The movie’s title, by contrast, is at best a throw-away quote from Lipsky, a generic description of his road trip with Wallace that appears in the memoir. At worst, it’s a winky nudge to the viewer that Wallace is coming to the “end” of his own “tour” as the film unfolds.

Thanks to the pall cast by the opening scene and the change in title, even potentially blasé observations about the current state of things are manipulated into melodramatic anvils:

“In ten or fifteen years, we’re going to have virtual reality pornography. Now, if I don’t develop some machinery for being able to turn off pure unalloyed pleasure, and allow myself to go out and, you know, grocery shop and pay the rent? I don’t know about you, but I’m going to have to leave the planet.”

In delivering this line, Jason Segel emphasizes the words “I’m going to have to leave the planet” so they hit us like a copy of Infinite Jest dropped from the Empire State Building. Yes, these are Wallace’s own words, but his own words selectively chosen from three hundred pages of conversations, chopped to a sixty-page screenplay, and arranged to portray his life as a fatalistic lumbering towards death, as one long, slow, and painful ending. Glenn Kenny, in a scathing essay for The Guardian, denounced the film for “insist[ing] that suicide loomed over everything Wallace did a full 12 years before the end.” The tenderer moments of the film may not deserve this sweeping criticism, moments like the above quotation rather perversely define Wallace by his depression and suicide at the exclusion of anything else. 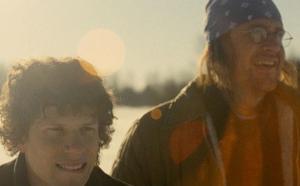 In the end, Ponsoldt’s intended film, the “Before Sunrise” for the literary set, is all but buried underneath these cloying innuendos. The film is at its best when it functions as a character study of two neurotics, two men grappling with palpable insecurity and fumbling through a genuine human connection. Just like Ponsoldt’s tender debut, The Spectacular Now, the heart of the film follows the ebb and flow of a newly developing relationship, the wary negotiations between two people who are uncertain of each other’s motives, the startling arc that occurs when a dynamic ends up in a place that is wholly unexpected. The crescendo of the conflict between the two men is artfully built, and their interactions are fraught with visceral tension: I had a pit in my stomach almost throughout the two-hour runtime.

The End of the Tour is also a saddeningly honest examination of neurosis itself; this presentation of Wallace (and to some extent Lipsky as well) is a tragic figure independent of his real-life illness, simply because he is unable to quiet the voices in his head. Everything he says has a counterargument, everything he does can be interpreted in ways he didn’t intend. He finds his thoughts perpetually chasing their own tails ad nauseam: he “treasures his regular guy-ness,” but he knows it’s condescending to pretend that he isn’t smarter and more successful than the guy sitting across from him. He wears his bandana because he sweats profusely, not as a trademark, but he knows that others see it as a trademark, so wearing it is a tacit consent to the mystique. This tension is richly and sensitively represented, and demonstrates the neurotic tendency to entertain relentless, circular arguments inside one’s head.

From Although Of Course You End Up Becoming Yourself:

Beyond these small but gratifying characterizations,  the script prunes the meandering conversations of Lipsky’s memoir into a relatively cohesive meditation on loneliness in the age of instant gratification. Wallace offers insights into American culture that are not particularly original, but nonetheless ring true; we watch television (and pornography) in order to fulfill the need for human connection in an entirely artificial manner. There’s another person in the room, which gives the illusion of some kind of relationship, without any expectation of reciprocation. Television gives us friends and lovers who conveniently don’t talk back. As Wallace says, our “quick fixes” for true intimacy are analogous to eating candy for every meal: the consumption of calories that are life-sustaining in the short term, but completely empty.

The film’s doesn’t do these themes any favors by relaying them as received wisdom from the prophet Wallace; in the end they seem less truth than truism, largely because anxieties surrounding the effects of burgeoning technologies on real-life relationships are not exactly revolutionary anymore. Especially since the advent of social media, the conundrum is discussed daily and at length. And even taking into account the film’s setting, almost a decade before Facebook slithered onto the scene, television has been damned as the hedonistic bane of human existence since the fifties, and every new wave of technology since the Industrial Revolution has brought a new influx of naysayers and doomsdayers.

These grand observations are more successful as a backdrop for the character study of the two protagonists. Lipsky and Wallace meet under the most unnatural of circumstances, in which they both openly admit to their own self-interested agendas. But even as they know their intimacy is mostly forced, they still make tentative, frustrated steps towards each other, trying to cure their respective loneliness through inherently artificial means. At one point, Wallace says, “This is nice, but this is not real.” He happens to be talking about his interplay with Lipsky, but he could just as easily be talking about television, or candy, or alcohol, or virtual reality pornography. 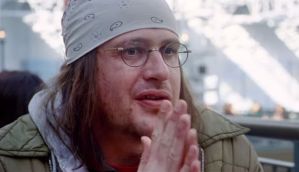 But after lauding the merits of the film, the question remains: should it exist? There is no self-evident  answer, only a neurotic series of loops: one could argue that we’re all capitalizing on a man’s tragic suicide by cynically transforming him into an object lesson for our own self-actualization. But one could also argue that Wallace has, in fact, become a cultural institution, and that this kind of movie is not about the man himself, but about the myth. But on the other hand, the moviegoing public will almost certainly conflate Jason Segel’s (admittedly sensitive and layered) performance with the man to some extent.

In a bit of meta-commentary that may or may not have been intentional, Jesse Eisenberg’s Lipsky serves as a stand-in for those moviegoers. The film is critical of Lipsky’s almost parasitic relationship with Wallace, in which he fashions the man sitting across from him into a cohesive narrative, into a “hook,” for his own interests. Segel’s Wallace is palpably discomfited by the notion of a writerly persona, which only underscores the portrayal of Lipsky as a snake – a conflicted snake, but a snake nonetheless – who wants to mold Wallace into one of several applicable stereotypes: the falsely humble celebrity, the suicidal poet, the inspired drug addict. By insinuating that Wallace wrote Infinite Jest from his own experience, Lipsky is quite literally trying to turn Wallace into a character from his own book, and the film doesn’t let him off the hook for this presumptuousness.

But in that case, The End of The Tour is also critical of the filmmakers’ intentions, and the audience’s, for that matter. Karen Green, who was married to Wallace from 2004 until his death, did not endorse the film, and generally shies away from the morbid reverence surrounding his suicide: “It all turns him into a celebrity writer dude, which I think would have made him wince, the good part of him.” The End of the Tour problematizes this transformation even as it becomes a part of the phenomenon, and in watching this film, we all become complicit in the adaptation of a human being.