Rewatching Wet Hot American Summer recently with JD (who had never seen it), I was transported back to my freshman year of college. I had just recently discovered the power of the cult hit: doodled Donnie Darko references littered every page of notes I took in class, my nickname was “Jack’s Colon” à la Fight Club, a Napoleon Dynamite poster shared space on my dorm room wall with the fire exit and a low-sloping roof. But Wet Hot American Summer was the movie I proselytized to my friends, trying to seem as cool as the movie was: funny in a totally different, surprising way, messing with timelines, with expectations, with even the most faux-liberated college kid’s sense of decency (is that… Molly Ringwald… falling in love with an eleven-year-old?)

The First Day of Camp, recently released on Netflix, is at least as exciting as the movie. A reporter infiltrates the camp and reignites the rock career of a mysterious former counselor; the counselors audition, rehearse and perform a climactic musical scheduled for the end of the first day; and (because a dash of Science Fiction for the Insane is necessary to achieve the perfect balance of flavors we know and love from the movie) the camp managers battle the government to prevent nuclear waste from being dumped at the camp. 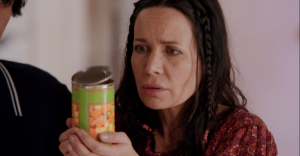 It’s always easy for fans to find something to gripe about in a reboot, but Wet Hot American Summer: First Day of Camp neatly sidestepped it all by not actually rebooting. There’s no new timeline – it all takes place just a few weeks before the original movie, as the title implies; no new cast – though Marisa Ryan shares the role of Abby with a younger actress in a very amusing twist; no change in gender balance and certainly no change in racial diversity, though we could forgive them that since it’s a Jewish camp. Meanwhile, the backstory of certain characters is filled in bit by absurd bit. I know you wanted to know how that talking can of vegetables with Archer’s voice got to be who he was.

I say it isn’t a reboot, but there are definitely a lot of welcome additions. Josh Charles comes on as Blake, the ringleader of a band of super mean, super rich kids from the posh camp across the way, in a performance that veers exhilaratingly back and forth across the line of too much, his popped collar seeming to literally puff out with anger every time he flies into a spoiled rage, which is approximately always. The show bestows its villain with the requisite two browbeaten sidekicks, sporting Nantucket-ready pastels to rival Charles’, but also brilliantly adds Kristen Wiig as a preppy temptress with Bonne-Belle-pink chapstick whichthat she wields to excellent effect.

Josh Charles as the money-ripping Blake, with Kristen Wiig as the queen of chapstick application, Courtney.

Lake Bell joins as the overalls-clad Donna, just back from Israel (of course) and newly awakened to the fact well-known to a certain type of teenager, that if you talk in a certain way and say “energy feather” a lot, you can sound a lot more spiritual than you are. Michael Showalter’s Coop is convinced they’re boyfriend and girlfriend, and the show makes you wait through a cringe-y few scenes before you realize his romantic disappointment will be a lot slower, more awkward, and funnier than a simple, “You thought I was your girlfriend?!”

But probably the best addition is a camper named Drew, whose smirking face has the same obnoxious fascination of that bully that tortured each of us in high school, and who is so gloriously foul-mouthed that I found a new appreciation for the freedom of non-network TV. “I’m the burp king of Westchester!” he repeats hilariously, before and after a pivotal (as much as anything could be pivotal in a show whose plots are mostly of the drunk-riffing-in-the-writer’s-room-at-two-a.m. variety, more extended jokes about archetypal plots than actual plots) burp contest that I have to say I did not enjoy.

Perhaps the strangest addition that you wouldn’t find in the original movie is caution. Where the original movie sped through a completely incongruous Jay McInerney-esque drug-binge storyline in the space of an hour, going from first toke to rock bottom at a heroin den, First Day speeds through something altogether more mundane: a courtroom drama, albeit with the inspired casting of Michael Cera as a lawyer overwhelmed both by the case and by his own clothes, that whiplashes through the usual tropes of a courtroom drama, from the camp director’s passionate speech convincing to take on the case, to the last-minute presentation of damning evidence, which is amusingly presented as simply a scroll of meaningless computer printout that everyone reads as if it’s English, in a beautiful satire of the usual tortured climaxes of courtroom dramas. With a TV show, maybe, you can’t digress quite as far without risking painting yourself into a corner for the next ten episodes.

One of the biggest surprises, for me, was seeing the beginning of Katie and Andy’s doomed relationship from the movie recast as a romantic plotline for the First Day of Camp. I assumed that Katie and Coop would be the overarching romantic tension of the summer. Remember your heartbreak when you watched the original movie? You think your shy hero has finally won his dream, only for his dream girl to tell him she really cares more about sex than love right now, so see ya? Well, First Day of Camp doesn’t visibly remember that, and that’s a very good thing. Their sexual and romantic tension almost convinced me—and not because Paul Rudd let any of his natural charm shine through, believe me. It’s just that no matter how prepared you are to root for Coop, meeting the vein-popping, world-running Blake makes Andy’s laid-back, mostly harmless douchebaggery seem rather appealing. “Blake can’t blow your life like I can,” says the ever-eloquent Andy, and Katie is, well, blown. Marguerite Moreau’s face is the perfect combination of defensive skepticism and secret, delighted attraction. And it actually worked on me, dammit.

Speaking of romance: awhile back, a friend of mine asked if I had read any really romantic contemporary novels lately. Not being a fan of Y/A or that vast indefinable quantity known as genre literature, I had to admit that I simply hadn’t. Contemporary literary fiction is very, very low on romantic novels—Alan Hollinghurst’s The Stranger’s Child, about several generations of homosexuals in England, was the only truly romantic book I could think of at the moment. We theorized, or bullshitted, that perhaps the obstacles facing same-sex romance, quickly as they’re being broken down by social change, might make it easier for authors to write about them in literary fiction. For straight romance, so many obstacles must be contrived. (It’s also definitely possible that I just tend not to pick books that look like their entire point is to get two characters together unless they were written between 1810 and 1890. Which, I do pretty much the exact opposite with television, so.)

All of this is a winding intro to the fact that the real romance of the First Day is that between Michael Ian Black’s McKinley and Bradley Cooper’s Ben. “McKinley’s a fag… with Ben!” the bumbling male counselors realize halfway through the movie, which momentarily abandons its slapdash crudity for an actually moving sex scene between the two boy counselors, and an impromptu “wedding.” In the First Day, McKinley and Ben are, first, shyly flirtatious and then adorably earnest as they practice their song for the climactic musical performance being put on by the counselors at the end of the season. By the end of the day Coop is telling one of his campers that McKinley and Ben went on a date, so I don’t see how “McKinley’s a fag” could remain a secret for another eight weeks—but it doesn’t really matter, does it? Strict continuity is for sticks in the mud, and Wet Hot American Summer has no use for sticks in the mud. WHAS is too busy throwing bright green nuclear WASTE into the mud.

But what they’re doing is in many ways the grotesque mirror image of what we millennials, the older ones anyway, who loved Wet Hot American Summer back when we were camp-counselor age, are doing by watching: traveling back in time. Nostalgia in millennials is a well-known, well-exploited fact. Every generation has probably been equally nostalgic, but not every generation had a Buzzfeed with which to promote their favorite 30 lines from Center Stage on any random Tuesday. Even the new casting tweaks our nostalgia centers instead of, as with the movie, introducing us to something new: Hey, there’s Michael Cera. Hey, there’s Jason Schwartzman. Hey, there’s Roger Sterling. We know these guys. They’re all famous now. Some of them, I think, are famous partly because of WHAS the movie. The pleasure of the show is at least half the simple pleasure of recognition.