The episode opens with that combination of montage and super intense, unexpected music that The Good Wife does so well. Lots of guys getting arrested: it’s violent, disruptive, and scary.

Bond court is a thing I didn’t know about. Basically everyone’s in a holding pen, apparently, and a few lawyers show up and get paid $135 per person to argue for their bail. Alicia shows up to bond court one morning, where the other lawyers are… let’s just say, not very welcoming. One, Lucca, is very into the idea of “bar attorneys stick together,” but even she is skeptical of Alicia. Even worse, the judge flat-out ignores Alicia and assigns all the cases to the other lawyers. Alicia tries sucking up to him after court, but he calls her a “Marie Antoinette.” Just as she’s denying this, Louis Canning comes up in his limo to ask her to lunch. O-o-ops.

The next day the same thing happens, only this time Lucca decides she likes Alicia’s looks, and thinks she’s going to tough it out. So Lucca puts her neck on the line for Alicia, pretending she can’t handle her caseload today. The judge agrees, but says it will be Lucca’s fault if Alicia can’t keep up. So now Lucca’s stuck trying to explain to Alicia that listening to every client’s long sob story of innocence is not going to work when you have thirty seconds per client. Then she has to explain that Alicia won’t get paid unless she convinces her clients to check a magic little box that gets the lawyer paid out of the bail money.

The next day, Alicia agrees to cover for Lucca at bond court. “Bar attorneys stick together,” Lucca repeats. Unlike the other bar attorneys, Alicia totally buys this, because she misses the Kalinda hologram that up till now was her best female friend.  So she covers for Lucca, annoying the judge by dropping the files and generally being nervous and slow. Of course the more nervous he makes her, the slower she gets. It’s rough, and gets even rougher when the judge won’t let Alicia leave in time for probate court. But more on that later.

Eli Breaks Bad, and Louis Is the Devil

At lunch with Louis, Alicia says she doesn’t want to work with him. “Because you’re the devil,” she says. He takes this rather well, if mansplaining a long Milan Kundera allegory is “taking it well.” He says if two people bump into each other, one says “I’m sorry” and one says “Watch it,” Alicia is the apologizer – maybe because she’s a woman and doesn’t want to take up space in the world. “Let the devil teach you how to say watch it.”

All this does is convince Alicia that she hates being bossed around. So she calls Eli to tell him Peter should run for vice-president. Eli is thrilled and immediately starts chasing a woman named Ruth Eastman who’s famous in Illinois for his campaign staff.

It’s so very reminiscent of Will in “Hitting the Fan,” when he discovers Alicia is planning to leave the firm. And Eli’s response is exactly like Will’s—he vows to destroy Peter. This involves his getting a dramatic haircut (I couldn’t decide if the best heading for this section was a Felicity reference or a Walter White reference), wiggling his eyebrows at himself in the mirror, and convincing Alicia he’s on her team. 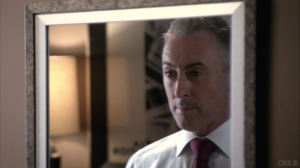 Alicia, meanwhile, was completely shocked to find Ruth had replaced Eli, got into a passive-aggressive sniping match with Peter on live TV, and even visited Eli at his home only to be told, “I was never your friend, I was just a political operative, I was the help, and I need to be done. That’s it.” So when Eli shows up in court with his fancy new haircut and asks to be her chief of staff, she’s all about it. She insists to Ruth that she won’t participate unless Eli is her chief of staff. Ruth wants to rehabilitate her, exactly as Eli cleverly warned her ahead of time: to “mold a real you that they’ll like.” Alicia only trusts Eli with this.

Eli gets in the last word.

Ruth confronts Eli, asking him what he’s doing. He has the most manic gleam in his eye as he explains his evil plan to use Alicia’s rehabilitation campaign to destroy Ruth and perhaps Peter (he hasn’t decided yet). He also explains to her that she can’t call him out because it will destroy her credibility with Peter. He’s having so much fun being evil. As he marches out, even Ruth can’t help but laugh.

I don’t think it’s worth recapping this in depth, but basically, Cary gets really bored in some partner meetings and tries to get more engagement out of the way-more-fun associates. In particular, a baby-faced young associate wants the firm to use some sort of silly data visualization program to make their billing more efficient. (In no way does fancy data visualization seem necessary to streamline attorney billing, but whatever.)

See? So young and fresh-faced.

The proposal is rejected by the partners, including Howard Lyman who’s spent most of the episode sneezing, snorting, coughing, and snoring his way through meetings, and Diane, who’s worn a lot of fabulous clothes but hasn’t done a whole lot. Cary tries to get Fresh-Faced Associate to keep pitching ideas, but FFA thinks he’s being hit on instead. “No. No. No, I wasn’t,” Cary says.

I think it’s safe to say Cary won’t be hearing any more ideas in the future.

One day Alicia returns to her apartment only to be greeted by Grace calling her “Mrs. Florrick” and speaking in a hilarious fake-professional voice. Apparently a client has stopped by and Grace is pretending to be Alicia’s assistant. She also pretends that a judge is calling (really it’s Grace calling herself). By the time she offers to hold all of Mrs. Florrick’s calls, Alicia is barely holding it together. Luckily the client doesn’t notice anything.

The case is: Alicia’s client’s mother died, leaving post-it notes to show who was inheriting what. The only thing of value is an $8 million signed Chagall print. But when Alicia and David Lee, who’s representing the other heir, show up to the scene, all the sticky notes have fallen off in the heat wave.

This leads to a series of experts: first the adhesive expert (“That’s a job?!” asks the judge), who declares that Dutch gold leaf present on David Lee’s client’s post-it shows that he was supposed to inherit the painting. Alicia tells Grace to find an aerodynamics expert and adds, hilariously, “They’re going after science!” It makes David Lee sound like a rabid creationist. So Alicia gets an aerodynamics expert who argues the Post-Its couldn’t have fallen that far way. But David Lee gets a “suction expert” to argue that a Roomba brought the Post-It elsewhere (Judge: “OK, now you’re just making these jobs up”).  Finally, Alicia gets Grace to use her magical URL-typing powers to… read the Roomba website, I guess? and highlight it and find out that “the programmed path can be disrupted.” If the Roomba runs out of batteries. Gee, you don’t say. 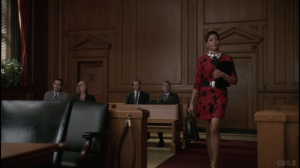 What actually wins the case, though, is Lucca. Alicia gets stuck at bond court while covering for Lucca, so Lucca goes in to probate court to unsuccessfully argue for a continuance. She’s, wearing, I might add, an absolutely fabulous dress – Go Fug Yourself called it “bananas but somehow also fantastic.” But anyway, Diane has presented convincing evidence that the dead woman intended Selena (the housekeeper) to inherit the Chagall. After multiple attempts to get a continuance, Lucca puts it all together: this is about an inheritance, a housekeeper, and an invalid. Bingo! Chicago law prevents caretakers from inheriting over $20,000.

At the end of the episode, we see Alicia waiting for someone—who turns out to be Lucca. She thanks Lucca, but Lucca says she was “just vamping.” Then she goes off to dance as soon as Alicia tries to make closer friends. Weird.

But this leaves it open for Louis Canning to slide into the spot. (“Excuse me!” Alicia cries when he bumps into her; he says “Watch it,” proving his point again—although earlier, Alicia had the same thing happen, except she did say sorry and may have felt better.) She says Diane tipped her off to the fact that she got the case because of Canning, not just a random google search. Canning asks if she wants him to stop sending her cases while he waits for her to change her mind about working for him. “No,” she answers, and they clink.

Is anyone else starting to think Canning and Alicia would actually be a great couple? No, I didn’t think so. I really am, though. I love their little dance of paranoia and charm, suspicion and shared glances of understanding.

I thought this episode was extremely watchable. Funny stuff with all the experts and the judge who couldn’t handle it; with Grace pretending to be Alicia’s assistant; with Cary accidentally coming on to an associate. 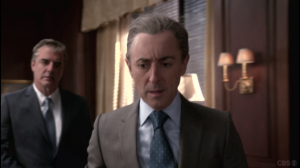 Eli storming away from Peter

But in terms of serious developments, I think the bulk of the action here went to Eli. He’s betrayed; he’s going to react now, to spend his life systematically destroying his betrayers. It is a lot like Will, only where Josh Charles played it straight, his face so determined and serious and hurt that you just wanted to cry, with Eli it’s a campier, more dramatic, more flamboyant hurt that’s just fun. I’m kind of rooting for him to destroy Ruth Eastman. And maybe Peter (though Peter, like a cockroach, really can’t be destroyed, I think). Either way, the Will’s-revenge arc in season 5 was, in my opinion, the best series of episodes this show ever did, and I’m excited to see a similar arc with a very different character and milieu.

Of course it’s thrilling to see Alicia develop a friendship with Lucca. (We’ve definitely been looking forward to it!) Introducing a character who’s not white, who has a personality and—I think, from the various instances of caginess that Lucca’s exhibited—her own agenda, is a nice relief after the distance put between Alicia and Kalinda recently. But I have to admit that I saw Alicia reacting a lot more than acting here—she didn’t even decide to befriend Lucca; Lucca decided to befriend her. Plus, the actual legal stuff was funny but not particularly world-changing, and Alicia didn’t even win her own case! In the rest of the season I’d really like to see Alicia taking a more active role, working towards a goal. Maybe she’ll team up with Eli to take Peter down. That I’d like to see. 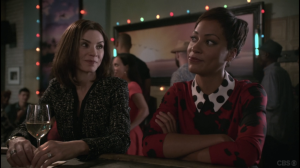