What’s in a font? I first saw this book in our local bookstore and assumed it was being marketed solely to women. It was some combination of the title, with the word “Beautiful” in it; the photographic cover; and the font, a curly script more often seen on Nora Roberts covers.

Basically, it’s the kind of cover you put on a book if you’re hoping Hollywood will option it for a bajillion dollars to make a movie about Julia Roberts meeting a new boyfriend while on vacation in Europe.

But then I went to a literary conference and found this edition, with its tiny typewriter-like font, and an artsy, near-bare cover: 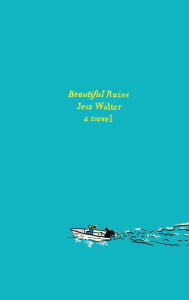 Suddenly I desperately wanted to read the book. (I was even more shocked when I realized the gender-neutral-sounding “Jess” was a male author; usually, I would think a male author could escape the curly-font-on-the-cover treatment unless he was actively trying to market himself as a romance novel.)

It turned out to be highly enjoyable, falling into that somewhat rare category of books that can be great beach reads, but are well-written enough to have literary merit. Featuring a quirky but bucolic setting–a tiny Italian town too insignificant to be admitted to the Cinque Terre as a sixth terra–and ranging all the way to the slimiest parts of Hollywood, it is the story of a man who sets out to find a woman against whom a huge wrong was committed, and the younger people–a struggling writer, a troubled musician, and a Hollywood executive’s assistant–who are changed by his quest.

The book has at its heart a great deal of longing: for the past in which Liz Taylor and Richard Burton were the great American romance, instead of the tawdry Swoki or Bennifer; for that one person who almost loved you for a minute; for success; for fulfillment. Its characters are stock “types,” like so many movies; but their inner voices and life histories are rendered sensitively and engagingly. (Richard Burton, in fact, features as a character in the novel, which veers momentarily into assuming a little too much longing and fannishness for old Hollywood on the part of its readers.) Most impressive, to me, is the clarity with which Jess Walters shows that good intentions are often inadequate to ensure good results, and how relatable human weakness can lead to mistakes that do lasting harm.

I do feel, though, that my reading of it was heavily influenced by the cover. I hate to admit it, but if I had somehow been obliged to read it without having seen that second, artsier cover, I could easily imagine myself writing something lukewarm, like: “It’s an enjoyable read, with somewhat cliched but likable characters, that revolves around the idea that Richard Burton may have had a secret skeleton in his closet that no one knew about.” From that angle, the book sounds more like a decent plane read. Harlequin romances put dudes on their cover who look like Prince Eric because they know humans are shallow. But those of us who read Serious Literature may not be so different!