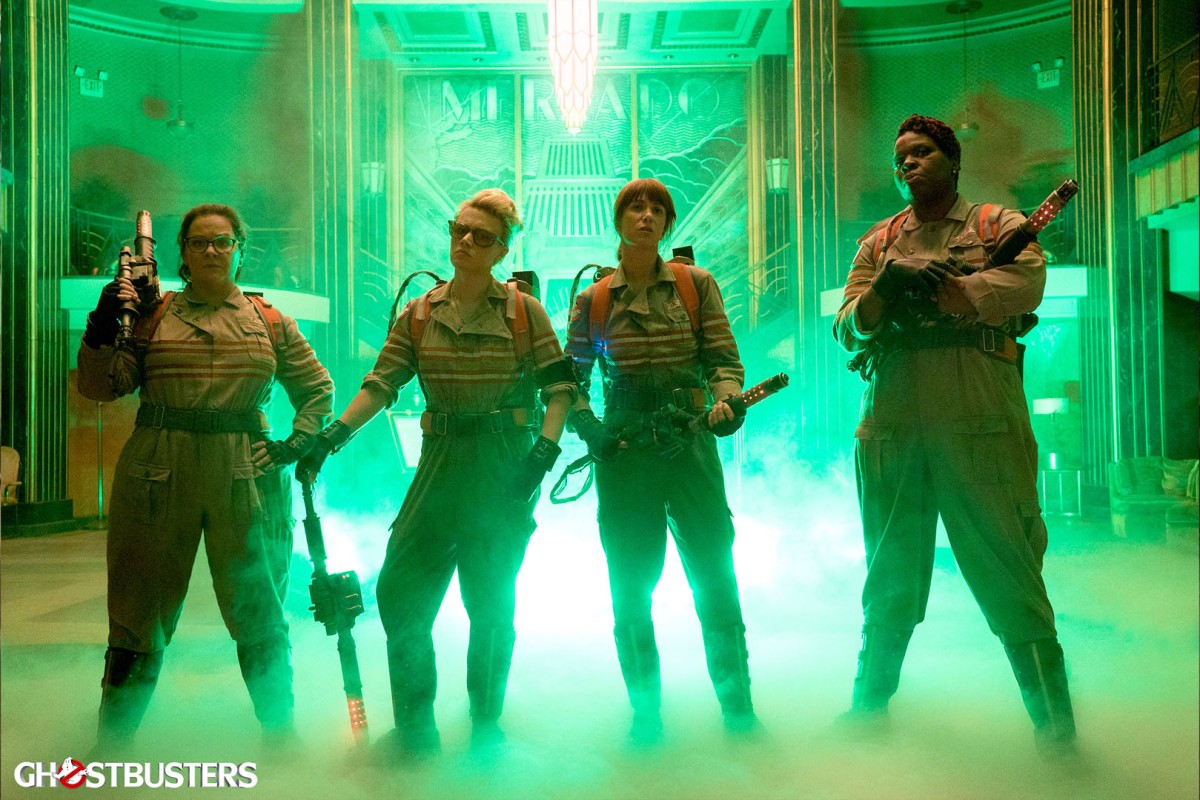 In the opening sequence of the new Ghostbusters movie, the inimitably funny and awkward Zach Woods plays a haunted house tour guide who cynically trips a secret mechanism to make it look like the ghost in the basement has knocked something to the floor. But one night when he locks up, he finds out the ghost in the basement might not just be an invention to sell tour tickets. Near the end of the (admittedly kind of scary) sequence, he realizes he’s run to the exact wrong place and says to himself what we all want to say to the characters in every scary movie at least once: You’re Such an Idiot.

That sort of self-aware, dry, real-person humor and meta-commentary is a hallmark of the Ghostbusters reboot. Kristen Wiig especially, as shy professor Erin Gilbert, constantly gets off those mumblecore one-liners that she’s so good at—“I think you could have figured out which one I meant,” she mumbles when the tour guide unnecessarily alarms all three Ghostbusters by implying that the man who brought them there is a ghost.

In fact, one of the most deeply enjoyable things about the new movie (and about the original) is the way that it makes room for so many different types of humor, allowing its stars a lot of room to do what they do best, starting with Kristen Wiig’s mumblecore. Leslie Jones portrays Patty, the quintessential clever, brash New Yorker who quits her job at the MTA to join the Ghostbusters (which, since she’s the only black woman of the four and the only non-scientist, feels very problematic as you’re watching it even though the part was originally conceived for Melissa McCarthy). She gets in some great quips and snarky facial expressions about their surreal situation. Melissa McCarthy is paranormal scientist Abby Yates, estranged from Erin because the latter has abandoned the study of the paranormal. Although she actually—and disappointingly—doesn’t get very much to do compared to the others, she at least gets to have a few aggressive, in-your-face rants (usually about wontons), of the kind that she also performed with aplomb in The Heat and Bridesmaids. And Kate McKinnon plays brilliant, weird nuclear engineer Jillian sort of like a someone who’s constantly about to either break into a psycho laugh or proposition her friends. It’s kind of inexplicable, but a very funny schtick nonetheless.

It is hard to come to the new Ghostbusters with fresh eyes. For one thing, the original movie was such a classic that you have to approach the film with some trepidation. Some reboots are so aggressively stupid that their stupidity reaches back and taints the original in your mind (looking at you, Jim Carrey in the live-action Grinch). And for another, almost anyone who’s read the news in the last year will have read that there is apparently a group of men on the internet who would not have a problem rebooting Ghostbusters with, say, Jonah Hill and Jason Sudeikis but think casting the equally talented Melissa McCarthy and Kristen Wiig is this momentous travesty, despite the fact that Jonah Hill doesn’t resemble Bill Murray any more than Melissa McCarthy does. So unless you’ve been living in a hole, you’re going into this either hoping it will prove you right that women should not be allowed to get their gross boobies all over your beloved childhood movie, or hoping it will prove you right that women artists have as much right to participate in a reinterpretation of a classic idea as men artists do.

Obviously, I was in the latter camp, and I was selfishly happy to finish the movie having laughed pretty much the entire time. But also obviously, women artists will still have the right to participate in remakes no matter what happens with Ghostbusters. Whether or not this movie is funny is not a damn referendum on whether we should be making movies with women, it’s just one movie, which happened to float my boat and might float yours too, unless you’re a raging misogynist, in which case, psst, you’re reading the wrong blog.

But that doesn’t necessarily mean this movie captures the magic of the original. In fact it didn’t really seem to be trying to recreate the campy over-the-topness that marked the original. Such a tone is really not possible outside of the eighties anyway, and any attempt to exactly recreate it probably would’ve fallen flat. Instead it’s a little more ironic, a little dryer, a little bit smarter maybe, and certainly more pro-geek and pro-woman, as befits the tech-driven, post-third-wave twenty-first century. It’s just different from the original, and that’s fine, because it does its job of being a funny, entertaining big-budget comedy about four people who fight ghosts. And besides, nothing can ever match the magic of nostalgia anyway, so personally I’m always going to love the first one more, at least until I’m old enough that this one becomes nostalgic.

Chris Hemsworth replaces Annie Potts as the Ghostbusters receptionist, playing a handsome idiot with a giant grin that suggests he was having a blast the entire time. He gets something a little more edgy to do once the ghostly shit hits the fan, too, but before that, he essentially plays the reverse of the pretty women that Bill Murray’s horny pseudoscientist tricked into thinking they were psychic in the original: too beautiful to realize he’s incompetent because everyone is busy lying to him. He can’t work the phone, which makes sense since he thinks that blocking his eyes is how to avoid hearing things, and he has a tendency to announce visitors only after the Ghostbusters have already greeted them. (Kristen Wiig so hilariously portrayed her character’s giant, embarrassing crush on him that you might almost forget you’re watching someone be sexually harassed for laughs. Luckily, Melissa McCarthy irritably reminds her that she’s breaking the law in almost every scene.)

Many reviewers have pointed out a very funny nod to the online backlash against the female cast members, when the Ghostbusters find the online reaction to their first video of a ghost and are horrified by the sexist comments about them. Just don’t read them, is Abby’s advice, and that certainly applies to anything said about the cast online before the movie was even released.

But an even more interesting parallel, to me, is the villain himself. Neil Casey, as Rowan North, is short, pale, and kind of funny-looking; he spends a lot of time by himself, researching the paranormal, drawing complicated diagrams, and muttering to himself about how he deserves to be Respected, Dammit! His plan to get revenge on the world for not recognizing his awesomeness has a definite undercurrent of wanting to punish women for not rewarding his genius with sexytimes. As such, he takes his place in a long line of misogynists, both fictional and not, both conscious and unconscious—from Elliott Rodger to the narrator of 500 Days of Summer—with the same attitude of punishing women for not recognizing what he believes he’s entitled to. And that’s the problem that the internet has with this movie, isn’t it? A lot of men felt they were entitled to be represented in this movie, and became angry when they realized they had no way to claim what they irrationally believed they deserved, except to try to enforce it via online harassment.

Finally, Bill Murray himself shows up as a condescending, mansplaining Important Scientist who is duly punished for doubting the women with a big, satisfying joke I won’t spoil here. All of the original major cast members, except the late great Harold Ramis and the recently widowed Rick Moranis, make very funny cameos actually. Even both of the most beloved ghosts from the original—Slimer and the Stay-Puft Marshmallow Man—have brief, memorable appearances. But Bill Murray’s segment is basically a giant, glorious fuck-you to everyone who’s trying to use Rational Arguments to defend deeply held and utterly irrational beliefs that women do not deserve to participate in certain pursuits they see as belonging to themselves alone.

But we’re lucky enough to live in a generation where women do participate—in comedy, in science, in politics, in ghost-bustin’—because, controversy aside, this is a blast to watch.