Summary: Eight people died in the plane crash, and the news reports on Jane’s father’s involvement. A guilty Walt tries to burn the money (ugh what?? At least give it to charity!!), but then changes his mind. Skyler is still staying at Marie’s with the kids and has the divorce papers drawn up, but Walt is in denial. When he pleads that she doesn’t know “his side of the story,” she says flat-out, “You’re a drug dealer.” Oh, snap!! He doesn’t even try to deny it this time (except to pathetically correct that he’s a “manufacturer”), and she says she won’t tell anyone if he grants her the divorce and stays away from the kids. Walt tells Gus that he’s out, because he’s realized that he’s “not a criminal” and he wants to make changes. Gee, I wonder if he’ll stick to that.

Meanwhile, Jesse is in rehab, His group leader is played by Wynn Duffy from Justified, a great character actor who has made an entire career out of looking like a mustachioed creep, so I keep waiting for him to be a secret Big Bad, but instead he just sort of helps Jesse starts to deal with his guilt over what happened to Jane. Jesse comes back clean and ready to get back into drug dealing, with a gritty resolve that we haven’t seen from him before.

Skyler’s accusation. I almost gasped when she said “You’re a drug dealer”: the best kind of twist, one that’s surprising but completely inevitable. She’s a smart woman, of course she figured it out.

Jesse’s transformation. I’ve said it before and I’ll say it again: Jesse is far and away the more compelling character, with a far more dynamic arc. When he comes back from rehab, everything about Aaron Paul’s performance tells us that he’s a different person now–a harder, flintier version of himself. When he tells Walt that rehab taught him to “accept who he is,” it’s the perfect combination of actual character growth and very Jesse-like “I learned such and such in rehab” type of basic-ness. And when he says that he accepts that he’s “the bad guy,” because he blames himself for both Jane and the plane crash, it feels both earned and tragic. Now, there’s a sympathetic Breaking Bad moment.

This shot at the end, where a twin is approaching one of their victims. The directors of this show are great at wide shots.

The assembly at the high school. Not only is it about the stupid plane crash again, but the dialogue in this scene is awful. Especially that kid who went on and on about how college kids who find their roommate “hanging in a closet” they get an “automatic A.” Even a teenager wouldn’t say something that insensitive.

And then it gets even more far-fetched when Walt opens his mouth. He makes an insane speech about how this wasn’t even one of the top 50 plane crashes in history, and how everyone should just move on from it because “that’s what people do.” I know we’re supposed to think he’s in denial about his guilt or whatever, but–no. No one would do this unless they were actually mid-breakdown.

The yellow filter placed on all the scenes in Mexico. Kind of like the blue filter on Chino in The O.C., but racist. 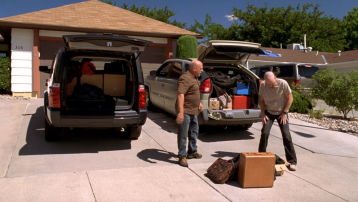 The cold open, which introduces us to the Brothers. It’s visually interesting, but I’m not sure how to feel about their usage of Mexican traditions to make them appear sinister. According to my (very superficial) research, the Brothers were crawling on the ground with other villagers who were performing a pilgrimage to visit the Virgin Mary, as a way to show humility and penitence, but they split off from the rest to visit Santa Muerte, a popular Mexican folk deity who symbolizes death, to ask her help in killing Heisenberg. I’m not Mexican, or well-informed enough to know whether this portrayal is accurate or offensive, but it didn’t sit well.

And, while we’re on the subject, this Big Bad seems lazier than ever. They’re big and menacing–twins are always a little scary–but at the end of the day, they’re just another big bad Latino stereotype, especially since they don’t get to utter one word of dialogue. I’m more interested in Gus, who seems to be a series-long Big Bad, but overall the villains in this show aren’t really up to par.

Also, the constant close-ups on their skull boots were pretty obvious/cheesy.

Yep, they’re bad guys, got it.

Summary: Walt is in a bad way. First, he gets pepper-sprayed and arrested for talking back to a cop. He’s also seemingly devastated to have lost his family, even though he didn’t seem to like them that much when he lived with them. He’s arguably better off than Skyler, though, who is taking all of the blame for the separation, and especially for keeping Walt from the kids. Walter Jr. blows up at her, and since she won’t tell anyone that Walt is a criminal, Hank and Marie think she’s being unreasonable. Walt realizes that she’s bluffing about going to the police, so he moves back in without her consent. Ugh. This is exactly what restraining orders are for.

Now that he’s all cleaned up, Jesse makes an effort to reconcile with his father. His father seems genuinely happy that he’s doing well, but is understandably not ready to let Jesse back into their lives. So Jesse goes to Saul with a dastardly plan, and buys back his parents’ house for a fraction of its worth by threatening them with the knowledge of the meth lab. Then he just strolls into it in the end, right in front of them, with a smirk like a Bond villain. Terrible, but kind of bad-ass.

The twins from last episode are back, and it turns out they’re related to Tuco’s uncle, who’s in a nursing home. They use a ouija board (and the bell!) to spell out words, and he spells out “WALTER WHITE.” So scary. They go to Walt’s house to kill him, but Mike, who’s been tasked with setting up listening devices in case Skyler goes to the police, tips off Gus, who apparently has sway over the Mexican cartel and calls them off. So… I guess Gus is this season’s Big Bad? Time will tell.

Tuco’s uncle is back! He’s such a great actor. He’s actually more terrifying than the twins.

Walt has a tantrum and accidentally throws a pizza onto Skyler’s roof, which becomes a great running visual gag throughout the episode. 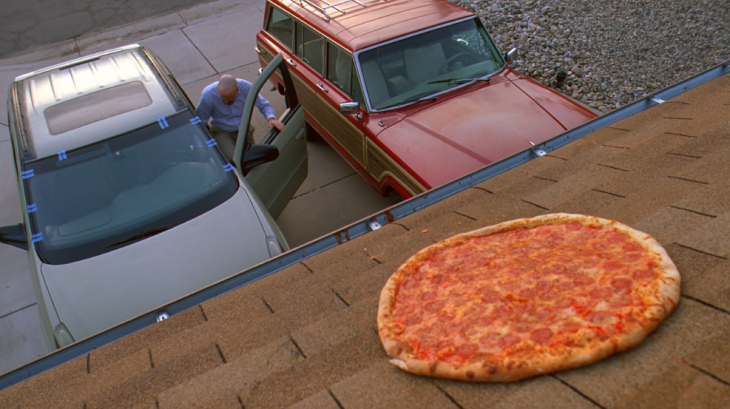 Jesse fucking over his parents via Saul. Not that they deserved it, but it’s a tense, funny scene. Saul is just a welcome presence in general. The premise of this show is so inherently silly, it would be much better if there were more Saul-like irreverent humor.

Skyler asking Ted how he would explain his embezzlement to his children. It’s super on-the-nose, and also–I’m just not on board with this plotline. Embezzlement is a pretty boring crime.

When Skyler leaves a message about the pizza on the roof, she threatens to file a restraining order, and a hungover Walt grabs his crotch and yells, “Restrain this!” Must he always grab his crotch when he doesn’t get his way? It’s… unpleasant.

The scene showing Mike being all cute with his grandkids. It’s an effective way to humanize a villain, but a super overused one.

The clusterfuck at the end of the episode, where literally everything coincidentally happens at once: Walt moves back into the house right as Mike is setting up listening devices, and Mike leaves right as the twins come into Walt’s house to kill him, so he’s able to call Gus’ people, and Gus is able to get in touch with the twins seconds before they kill Walt in his bedroom. It makes for exciting, but EXTREMELY convenient television.

Summary: Walt calls Skyler’s bluff and refuses to leave the house, because that’ll fix everything. She ends up calling the police, but ultimately doesn’t tell the cops about the drugs, especially since Walter Jr. comes home in the middle of everything. Her divorce lawyer advises her to tell the police and get a restraining order (yes! please!), but Skyler can’t bear to do that to Walter Jr. when Walt is probably going to die soon anyway. Walt reveals his giant bag of money to her, and has a long, condescending talk with her about how he did it all for the family. She, in turn, makes out with Ted in the copy room and then goes back to his place. Ted’s a creep and she deserves better, but it’s all made worth it when Walt cheerily says that he feels good about their talk because “Honesty is good,” and she just says, “I fucked Ted.” LOL!

Gus meets with the Twins and Tuco’s uncle, and tells them that they can’t kill Walt yet, because he’s still hoping to do business with Walt. But once they’re done with that business, they’re welcome to kill him. The twins are not pleased.

Hank is called back to the border, and he starts to experience PTSD symptoms again. He gets out his aggression by purposely provoking a bar fight with some local criminals. Gomez covers for him, but he’s clearly unraveling.

The gruesome flashback of Tortuga’s death at the hands of the Twins. For the entire friendly scene at the bar, you’re on the edge of your seat, because you know how it all ends. Plus, Danny Trejo!

Jesse calls Jane’s cellphone over and over, just to hear her voice on the voicemail message. Break my heart, why don’t you.

Not to be a hater, but I don’t believe that any cop would be that nice to Skyler, especially after finding out that they’re not legally separated. I actually enjoyed that scene, because it felt like a nice, comforting fantasy about the way cops would behave during complex domestic disputes.

Hank picking a fight at the bar. I’m glad that they’re following up on his PTSD, but this is sort of an obvious, cliched manifestation. Next he’ll start paying people to beat him up just so he can “feel something… anything.”

Skyler’s emotional arc. As a Skyler sympathizer, I completely understand that sleeping with Ted is Skyler’s way of taking back control after her husband, you know, put their entire family in danger by cooking meth and then refused to accept her breakup like a big creep. But so little attention has been paid to this character, so little nuance has gone into her characterization, that it’s not at all surprising that there are many viewers who can’t sympathize with her at this moment. The show is so uninterested in her perspective, as opposed to Walter’s, that the title of the episode–a cheeky acronym for “I Fucked Ted”–is at best unearned and at worst a little slut-shamey.

Does this mean that the writers have to take the blame for every idiot who can’t expend a few brain cells to sympathize with Skyler’s (very sympathetic) plight? Not exactly. As one very self-aware AVClub commenter put it, “I’m not really a fan of skyler. but that might be because I’m slightly misogynist.” But still, these fan reactions remind me of the missed opportunities with Skyler. If we weren’t so entrenched in Walt’s perspective, it might be easier for the average viewer to see Skyler as an actual human being.