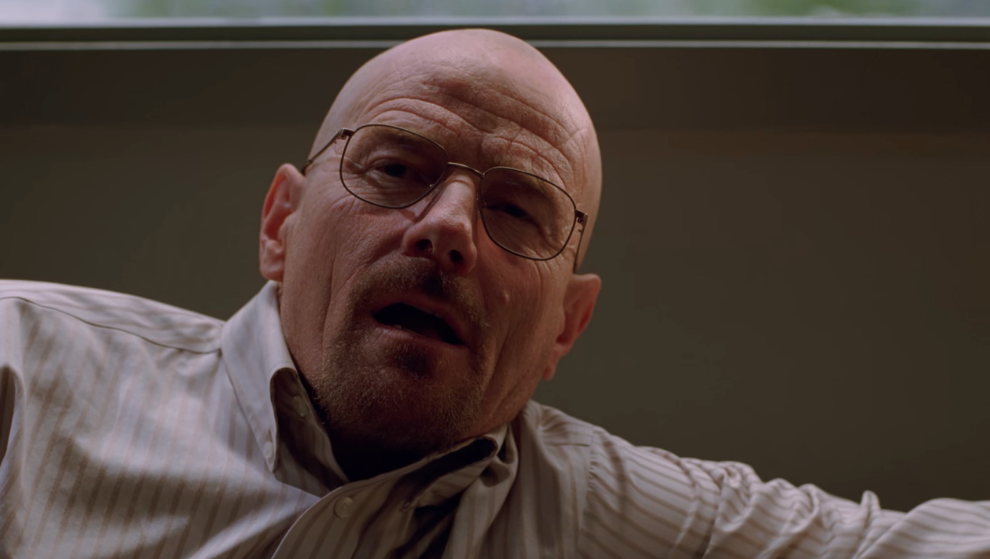 Walt tries to beat everyone up and sexually assaults someone, but everyone still hates Skyler.

Summary: Walt just sort of embarrasses himself all over the place. First, he goes to Skyler’s office and tries to beat up Ted. When Ted hides in his office, Walt tries to pull a macho move and break his office window with a planter, but he’s too weak to lift it. Heh. Then, when Saul takes him back to his office to calm down, Walt figures out that Saul bugged his house, and tries to beat him up. Then, when he gets called into the hot principal’s office for behavioral issues at work, he sexually harasses her and gets himself basically fired. Then he acts all “woe is me” when literally all of his problems are his own doing, because he’s Walt.

And it doesn’t get any better when we (finally) get to the drug stuff. Jesse visits Walt to tell him that he learned Walt’s recipe and made more of the blue meth by himself. He’s super excited to show Walt and get his approval, which is super cute in a dysfunctional way, but of course Walt can’t help being a complete asshole and berates him for peddling an “inferior” version of “his” product. Couldn’t he just have been proud of him? Just this once?

Mike sees that the twins drew a scythe outside of Walt’s house, and tells Gus that Walt’s still a marked man, and that he’ll likely be dead within two years from the cancer anyway. Gus manipulates Walt into coming back to the fold by accepting Jesse’s product and then just giving Walt half of the money, passive-aggressively. He’s already got Walt pegged.

Hank goes to the airport to return to El Paso, and then just blows it off. He takes his anger out on Gomez (again), who’s only trying to help. He terrorizes a poor teenager who bought some meth from Jesse because she thought he was dreamy. He finally, officially rejects the job offer in El Paso, ostensibly because he has a “break” in the Heisenberg case (blurry ATM photos of the RV), but really because he has PTSD. His boss knows this, but still doesn’t make him go to a counselor. It’s sad.

Also, Jane’s dad tries to kill himself. They’re really milking this for all it’s worth, aren’t they?

Saul and Mike listening to Walt and Skyler fight about Ted. When Walt fires him over the bugs, Saul calls Walt a “crybaby” and says “Who needs you?” Hee!

Saul calling random people near the debris field for his class action suit. “I’m not asking for an entire wing here! It could be a bag of peanuts, as long as it caused you pain and suffering.”

Hank’s unraveling. It was well-done, especially when he’s harassing that poor girl at the gas station. The acting is great all around, and you really get a sense that Hank is coming mentally undone. It’s nice to see a show with such a pulpy heart explore the psychological consequences of all this violence.

I like that they’re picking up the storyline about Hank’s PTSD again, but it seems really unrealistic that he wouldn’t have talked to any counselors. Wouldn’t they have made him talk to someone, especially after the beheading incident? He’s clearly a liability, and I think that’s just standard procedure anyway.

Walt’s bizarre behavior. He’s being so weird and creepy the entire episode, my partner kept asking if he was on drugs. Even Cranston’s performance is off–it feels like he just didn’t know how to sell this, so just acted as weird and crazy as possible. He does silly, cliched bottoming-out things like staring off into space with his mouth open, to the point that if he weren’t in remission I would have thought the cancer metastasized to his brain or something.

It’s pretty funny to see all of Walt’s attempts at violence fail, but again, we’re so deep into Walt’s sympathies, it’s not nearly the commentary on toxic masculinity that it could have been. Plus, it all suffers from the aforementioned tone issues.

More Skyler issues. Walt is making an ass of himself, but Skyler, who is only sort of/not really having an affair, is positioned as a villain. This week, the award to most self-aware AVClub commenter goes to this guy, who’s responding to the (astute) comment, “Not since Betty Draper on Mad Men has a character gotten so much internet hate for no real reason.”

“Well, the entire show has been shown to us through Walt’s (and in Mad Men’s case, Don’s) eyes. You understand that these guys have gone through some serious shit and you’re sympathetic toward their plights. Betty and Skylar are just harpies who are cheating to spite their husbands and gain control.”

Again, it’s questionable whether the writers need to take all the credit for this guy’s stupidity. But usage of the word “harpy” aside, he’s pointing out something very true–Breaking Bad works overtime to humanize Walt and make us understand why he would sexually assault the hot principal, but hardly ever takes the time to check in with Skyler’s emotional journey, let alone make us care about it.

Summary: Walt tells Gus that he won’t be sucked back in, but then Gus flatters him with his very own shiny lab. He says no, hoping to get his family back together. And it almost works–Skyler is still sleeping with Ted, but is also having second thoughts about divorcing Walt, especially since she doesn’t feel like she can go to the police. She even lets Walt hold Holly at one point. But all it takes is one jab from Jesse about giving Walt “charity” by allowing him to take a cut of Jesse’s profits, and Walt immediately makes a 180 and accepts Gus’ offer.

Hank finds out that Gomez is going to El Paso in his stead, and becomes even more obsessed with finding Heisenberg. Even Marie can tell something is wrong. Luckily, his obsession actually bears fruit when a mad search for the RV leads him to Combo’s mother, and he sees a picture of Combo and Jesse together. Whoops!

Marie finally gets one scene where she feels like a human being. She tells Hank that he can talk to her about his feelings, and then presses him a little about why he didn’t go to El Paso. It’s perfect, because she’s a little too pushy, which is in keeping with her character, but for once, it’s just because she cares.

I like that Gus knows exactly how to manipulate Walt, even though he barely knows him. His “be a man” and “provide for your family” nonsense is so transparent, but feeling like a man is literally Walt’s only motivation, and Gus knows it.

The lawyer’s tough love with Skyler. “I am half as qualified and twice the cost of a therapist, there’s nothing to discuss here.” I especially like when Skyler echoes Walt’s “I did it for the family” excuse, and the lawyer says “that’s an enormous load of horse shit.” Preach!

The incredibly gratuitous shots of women’s bare breasts in the strip club scene. I thought I was watching HBO for a minute there.

Hank jokes that Gomez is the right guy for the job because “bean-speak comes natural” to him. Still gross, especially when they’re conveniently putting their only Latino character out to pasture.

How many times do we need to watch Walt pretend to give up the drug business?

Also, is something going to happen at some point?