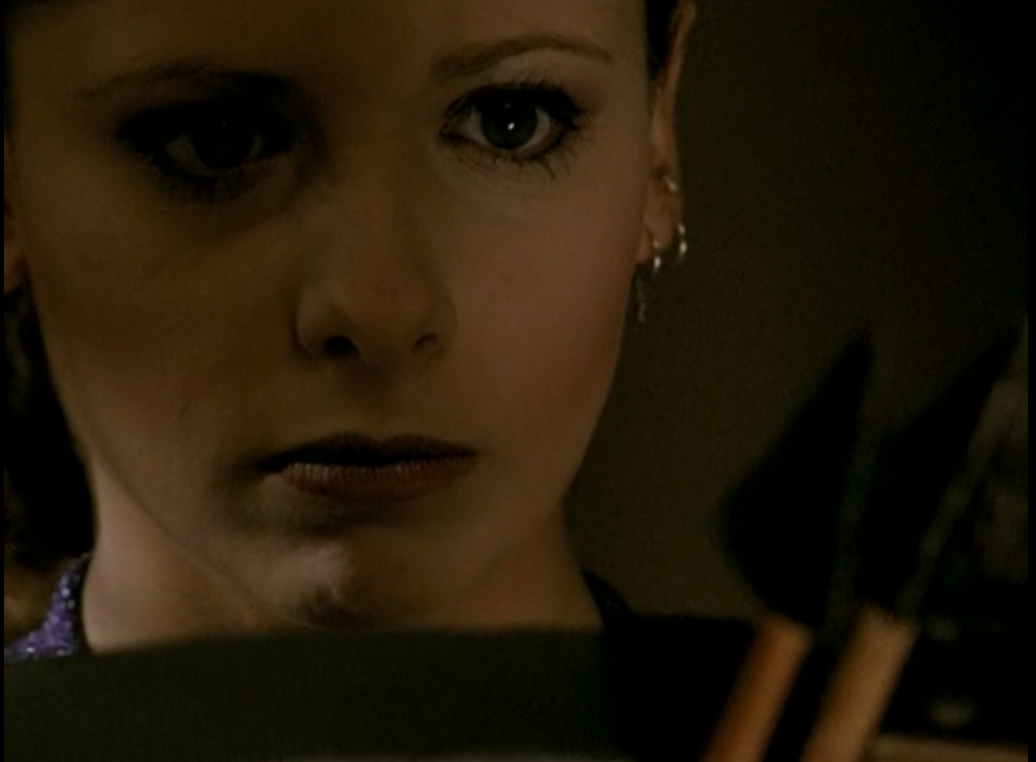 So as we know from some previous episode, the Anointed is a little boy named Colin. The Master, that super wrinkly dude with janky nostrils, is going to use him as a weapon against the Slayer. He decides to send a group of vampires cleverly called The Three to get Buffy just as, depressed at being single and lusting after the distant Angel, she slumps home from the Bronze alone. The three of them nearly overpower her, but Angel comes to save her. That’s kind of annoying, isn’t it? Like, Buffy is the Slayer, why does she need Angel to save her?

Angel’s wounded in the fight, so Buffy takes him home and tells him to take off his shirt, having finally found an excuse. He says he likes her, but they don’t end up kissing–they just have a chaste little sleepover with Angel on the floor, because of the three vampires that are still waiting outside. (Apparently vampires can’t come into houses unless they’re invited.) To fight whatever the Master sends next, Giles teaches Buffy to use some fancy weaponry; meanwhile, the Three get turned into dust by a gleeful Darla because they failed.

Buffy and Angel kiss that night while Angel’s still crashing at Buffy’s place, even though Angel warns Buffy that he’s a lot older than her. Like, a lot. Then, as soon as they kiss, he makes his big vampire face and she finally figures out that he’s a vampire. Giles and Xander try to convince her that all vampires are evil. But when Darla visits Angel to try to seduce him back to the fold, we see that he lives alone with a fridge full of packets of hospital blood. Unfortunately, he’s still pretty hot for human blood, so when he interrupts Darla about to eat Buffy’s mom, he is tempted into going for it–and just then, Buffy walks in. Needless to say, this isn’t good for their relationship.

Darla tries to convince Angel to go back to the dark side, and by “convince” I mean “seduce,” complete with much heavy breathing. Buffy sets out to kill Angel while Giles sits with her mom, who reveals that it was Darla who came over and bit her first. Buffy and Angel spar a bit, but then Angel puts his human face back on and tells Buffy that he has a soul, which was restored to him as a curse after he’d killed his whole family and a bunch of other people. When Darla shows up, ready to shoot Buffy with a gun (I guess they don’t want to get too close to Buffy now that she’s taken down so many of them), Angel kills Darla instead and saves Buffy’s life. Later, at the Bronze, Buffy and Angel announce they should stay away from each other, but then they smooch again.

In which Buffy took on technology. We start off with the monster-of-the-week, a big Italian demon named Moloch who looks like a green, horned Voldemort (except much cheaper-looking). Back in the 15th century, he is the leader of some kind of cult, where he gets kids to admit they love him, then breaks their necks (What? What’s the point of getting their devotion if you’re just going to kill them?) Then, a bunch of monks (?) read some sort of spell, and then the demon’s essence gets sucked into the book.

Back in the 90s, Buffy and her pigtails open the very same box that the monks put the book in and takes out the book. A gorgeous computer science teacher, Ms. Calendar, is hounding Giles to scan all of his books into the library computers, to his chagrin, while Willow and two geeky guys named Dave and Fritz help out. Fritz is creepy and pale and says hilarious things like “If you’re not jacked in, you’re not alive.” Willow scans in the demon book, and letters immediately start typing on the screen: “Where am I?” Hee!

A week later, Willow is talking to some mysterious boy on the internet named “Malcolm,” and Buffy gives her the stranger danger talk. “What if he’s a circus freak? What if he has back hair?” etc. Meanwhile, technology is going haywire all over campus, at first in the most random and tamest of ways–Molloch writes a whole new paper for a student about loving Nazi Germany–but then in more dangerous (but still random) ways, like changing students’ medical records. He also makes Fritz cut his name into his arm with a scalpel while repeating “I’m jacked in,” for some reason. (Was “jacked-in” ever a thing? I’m convinced that no one ever said this.)

Willow starts skipping class, which gets Buffy and Willow into their first fight and sets off Buffy’s spidey senses. She follows Dave to a closed research lab where people are up to something shady, and Moloch tells Dave and Fritz to kill her. Dave tries to lure her into a (very elaborate) trap in the locker room, where he’s left a live wire next to running water, but then warns her at the last minute, so she only gets a little electrocuted. He tells Molloch that he can’t kill her, and Molloch types out a suicide note for him while Fritz waits in the shadows. Later, Buffy finds him hanging in the classroom. Poor Dave!

Giles finds the empty Moloch book, and they figure out that Moloch is in the school computer (and “every computer connected to it by a modem”–hee!). They try to delete the file, but a pixelated version of Moloch yells at them that Willow is “none of their business.” Giles enlists Ms. Calendar to help, and luckily she’s a “technopagan” who is not surprised to hear that “there’s a demon in the internet.” They try to cast him out by like–typing a spell into the computer somewhere?–while Buffy and Xander go to warn Willow. Before they get there, Willow gets kidnapped by Fritz and brought to the research center, where Moloch has gotten his followers to build him a robot body, horns and all. He wants Willow to be his robot queen, but she refuses. He’s about to kill her, but then Giles and Ms. Calendar do their spell and get him out of the internet. Unfortunately, now that he has a body, he just sort of stays in his kaiju. (But isn’t the information controlling the robot from the internet? Whatever.) Buffy fights him a little, but he’s metal, so she eventually just gives up and tricks him into punching an electrical circuit, and he straight-up explodes. Don’t think that’s how that works, but that’s in keeping with this episode’s theme.

Every high school show needs a(t least one) performance episode, and Buffy gets right down to it in season 1 with a talent show! Giles has been conscripted to produce it, and when the Scoobs mock his misery they get sentenced to participate themselves by Principal Snyder, poor Flutie’s replacement (RIP Flutie).

A nerdy kid named Morgan does a fairly amusing fake-out act where he seems to do a terrible job at ventriloquism until the puppet, Sid, finally speaks up and makes fun of him. Of course, the title of the episode makes it clear that this is going to be the Baddie of the Week the minute he appears, even before Sid starts sexually harassing Willow and Buffy. Shortly after, a young ballet dancer is attacked in the locker room by an unseen baddie who growls loudly, “I … WILL … BE … FLESH!” and is later found with her heart removed. Gee, who could that be?

Investigations all point to Morgan: he was seen talking to the now-heartless dancer, and also he keeps rubbing his head and moaning. The Scoobs are investigating Morgan with no clue that it’s really the puppet, but meanwhile, Sid has a plan. Next thing you know, he’s breaking into Buffy’s bedroom to try to eat her face, but she wakes up and he skitters away like a cockroach. Giles finally figures out that there’s a kind of demon who needs human hearts and brains every seven years to stay human. But even then, NONE OF THEM FIGURE OUT THE PUPPET IS THE DEMON and they all just think Buffy is having nightmares, like, what?! How do you not see what’s going on?

Xander kidnaps Sid from Morgan like a big dummy (sorry, had to), and only after like hours of research do Willow and Giles figure out that toys can be magic, but by then Sid has run away. He magically causes a chandelier to fall on Buffy and almost squish her, then tries to eat her brain. But, twist! It turns out he thinks Buffy is a demon and that’s why he wanted to eat her, and he wants to get free of his dummy body–but only so that he can finally die, since his human body is already dead.

OK, so, I got a little bored/confused near the end here and this summary may not be 100% accurate. But basically what happens is they somehow figure out that someone else in the talent show is a demon, so Sid still has a shot. When he finds out Buffy’s the Slayer, he’s very impressed, and they bond over his search for mortality. Unfortunately, as soon as Buffy turns her back, Sid disappears… and next thing you know, there’s a disembodied brain falling from the ceiling. GROSS.

Finally, one kid is demonstrating his weird guillotine and then mentions his assistant is sick, and EVEN THOUGH GILES KNOWS THAT THERE’S A DEMON TRYING TO EAT PEOPLE’S BRAINS, he agrees to get himself locked in the crazy guillotine, because Giles is also a big dummy. Naturally, he almost gets his brain chopped out, but Buffy figures everything out in the nick of time and comes to save him. (Xander also gets to grab the rope that’s holding up the blade, and Willow gets to chop off the padlock with a big axe, but really, Buffy saves him.) The boss demon jumps out of a hidden compartment in the guillotine, but the gang manage to chop his head off with the conveniently supplied weapon, and then Sid chops out his heart so that Sid can finally be at rest, i.e. dead.