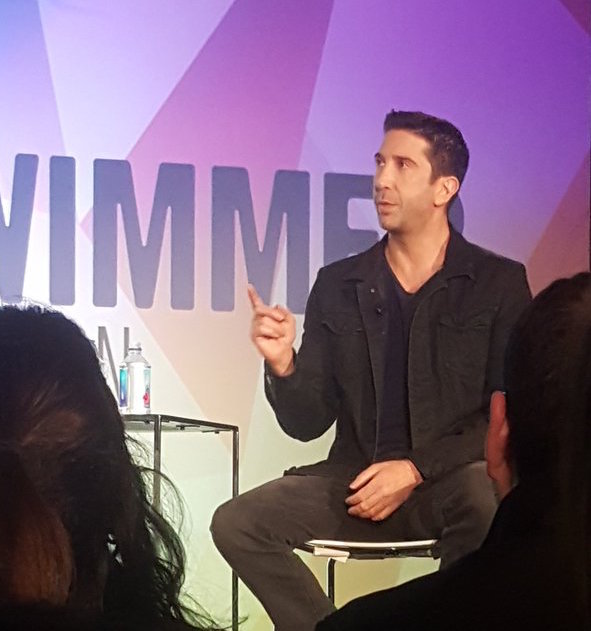 The pilot of AMC’s new show Feed The Beast screened today at the Vulture festival, followed by a conversation with David Schwimmer. Despite some potential political issues, it looks like an excellent addition to AMC’s lineup.

Tommy Moran, played by a ferociously (dare I say, determinedly) dark David Schwimmer, is a former sommelier drinking away his sorrows over the hit-and-run that killed his wife Rie and left his son TJ, who witnessed the death, completely silent. Dion is a talented cook whose coke problem has left him in jail for eight months, and he’s being followed around by a wrench-wielding bad guy in a black van named The Tooth Fairy.

Once upon a time, Rie, Dion, and Tommy were planning to open a Mediterranean restaurant in the Bronx named Thirio, but when Dion gets out of jail, Tommy is in the midst of falling apart. He drinks constantly; he’s still keeping his wife’s cracked iPhone charged so that TJ can call it and hear her voicemail message; and he lives upstairs from the half-finished restaurant, where every morning TJ makes him an artistic cappuccino from the restaurant’s fancy espresso machine. Dion, who crashes with Tommy while he’s trying to escape the Tooth Fairy, tries to convince Tommy to start work on the restaurant again. Tommy’s stuck in the morass of a dark, helpless grief, but soon Dion discovers an even stronger motivation to make sure Tommy plays along.

It’s a very strong pilot. Several promising arcs are set up: the work the two men need to do on the restaurant, the vague threat that Tommy might lose custody of TJ if he doesn’t get his shit together, the threat of the black van following Dion around, and (in my unspoiled opinion) the question of whether Rie’s death was as innocent as the “hit and run” that the characters think it was. (My guess is no, and I wouldn’t be entirely shocked if TJ turned out to be Dion’s biological son either, based on nothing more than a plot-free flashback and the fact that I’ve, you know, seen other TV shows.)

The show, as Schwimmer perspicaciously described it, is a mixture of “drama, dark comedy, violence, and cooking.” It is quite darkly funny: Schwimmer manages to get a laugh almost every time he swigs wine out of his oh-so-stealthy thermos right before anything remotely emotionally taxing is about to happen, and the biggest laugh came from someone uncontrollably sobbing in a support group for bereaved spouses, which is… impressive. The chemistry between Jim Sturgess, who plays Dion with an understated hangdog charm, and David Schwimmer is natural and fun to watch. Also, the show has a meaty, inventive credit sequence, which is a nice break from the stingy five-second credit sequences of a lot of recent shows I’ve been watching.

After the screening, we sat through a fairly awkward interview between a Vulture columnist and David Schwimmer. He got only a few questions on Feed the Beast before the columnist moved onto the topic of Friends, and you could see Schwimmer visibly wincing. How many times can you answer the same question about a Friends reunion, right? And he was smart about it; he said that for story and character reasons, he didn’t see a need for it. He also said, in answer to a different question, that the writing was excellent, so he did pay some lip service to the show. But I got the sense that he wasn’t having fun, and he answered several other questions as if they were non-starters, where I’ve seen other actors answer extremely stupid questions by turning them into smarter questions or telling charming anecdotes: in other words, by using their charisma to paper over the awkwardness.

Then things went further downhill: someone asked him what three famous people he would choose to live with on a desert island, and he literally said that that was a “magazine question” and asked, “Is there a real question?” Ouch! He was right that the question was stupid, but on the other hand, this came right on the heels of some other fan who took the mic to say essentially, “I liked you in Curb Your Enthusiasm, and that’s why I’m here to see you at this panel.” No actual question involved. So it’s not like fans have a history of asking pithy, insightful questions. Why was he surprised—and how, after twenty-two years of fame, has he not gotten used to things like this?

In fact, I started to wonder if the reason Schwimmer has not had a particularly luminous post-Friends career is this discomfort, this unwillingness to play along with the game that stars are asked to play—treating every question like it’s legitimate, treating every person like their new best friend, and generally submitting to the insane requirement of being nice to people no matter how much of your time they waste. I myself was tempted to judge him for playing the game so badly, despite the fact that I believe it’s problematic, how automatically we demand this performance of niceness from actors. When authors answer stupid questions with snark and defiance, I love it—why don’t I love it from actors? And David Schwimmer does deserve to be asked about things other than Friends. He dreams of directing a film adaptation of The Jungle, by Upton Sinclair (which in today’s political climate is extremely necessary), he likes Dostoyevsky, and his acting in this pilot was moving and complex. Let’s talk to him about that stuff!

One person, however, asked a really good question and still got somewhat shut down: she wanted to know if there were any challenges to portraying the parent of a biracial child, and if that would feature in future plotlines. Schwimmer seemed pretty resistant to that question; he said the challenge in that relationship was the fact that the kid was traumatized and refused to talk, not that he was biracial; that the only racially tinged challenge was the fact that his character’s father is racist. That’s all true, and yet. And yet. Wouldn’t it have been easy enough to give the question a bit more thought? I mean, let’s be serious. This show takes place in the fucking Bronx. It stars two white men. The only major characters of color in the pilot are Rie and TJ; the former is dead before the pilot even starts (she features in a couple flashbacks) and the latter is literally silent. That’s not to discount, by the way, the utterly winning, expressive performance of Elijah Jacob, who plays TJ; he is an excellent actor, young as he is, and is given meaty emotions that he portrays with sensitivity; but the very fact that the show doesn’t give him dialogue is still relevant here.

I considered asking about that, but I didn’t. Perhaps I should have. At one point, Schwimmer referred to Friends as taking place during a “more innocent time.” He meant that people didn’t have the same technological advantages they once had. But it was “innocent” for Hollywood, too. Back then, a show about six straight white people was just a show (at least, to execs, and probably to its white audiences). Hollywood had the certainly-not-innocuous innocence of white privilege, in which shows like that could exist without having to justify their lack of diversity. That kind of innocence, thankfully, no longer exists; I am sure that larger media outlets than I will be asking why a show that’s set in the Bronx doesn’t have any speaking roles for black people, and I’m surprised, actually, that AMC didn’t see this as a problem.

That said, so much else about this show looks promising and intelligent that I look forward to the remainder of the season.