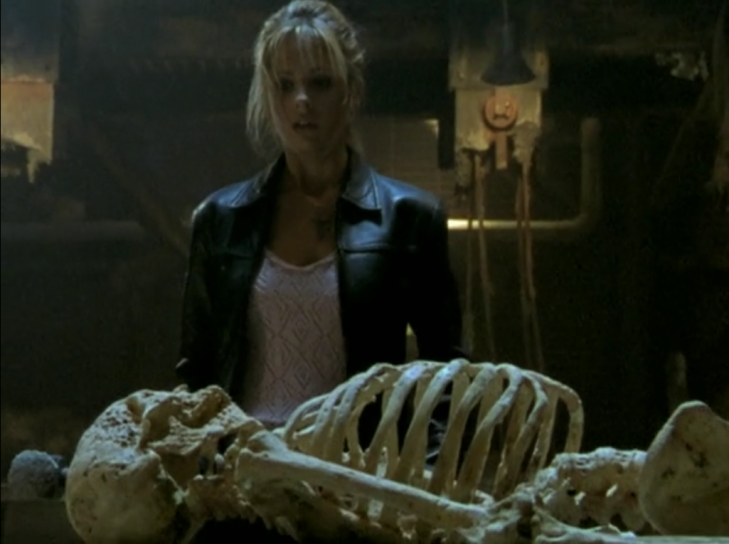 Buffy comes back from a summer with her dad in LA with a new haircut and a new attitude. Apparently the trauma of dying and being brought back to life in season 1’s premiere has had an effect, and that effect was to turn Buffy rather… chilly. She’s withdrawn from everyone, and even when Angel comes to warn her about the Anointed One, she pretends not to have missed him. Later, she disses Angel at the club in favor of doing a sexy dance with Xander, at which point both Willow and I became convinced that Buffy was actually bewitched. Even Cordelia thinks Buffy’s being a jerk and warns her to get over herself.

Meanwhile, the vampires and the Anointed One are still hanging out underground planning new shenanigans. Giles figures out what the vampires are up to when Buffy discovers that the Master’s bones have disappeared from their grave: they’re trying to enact some kind of ritual to resurrect the Master. The vampires kidnap Cordelia and Miss Calendar and use them as bait to get Buffy to come meet them underground. Buffy believes it’s a trap to use her for the resurrection ritual, but since she’s still in Ice Queen Mode, she refuses any help from Giles, Willow or Xander, pissing them all off even more.

Once she’s down there, she realizes it was a different kind of trap: the people the vampires actually want for the ritual are Willow and Giles (along with Cordelia and Miss Calendar). Buffy runs back to the library, but it’s too late, Giles and Willow are gone. Xander is totally pissed off at Buffy by this point, but he goes with Buffy and Angel to free their friends, who are all being hung upside down over the Master’s bones as part of the ritual, for reasons I’m not totally clear on. Once Buffy’s done killing all the vampires, she smashes the Master’s bones to powder with a giant sledgehammer (and then gets a big, sweet hug from Angel). Somehow this purges all of her Dark, Brooding Attitude and she decides to be nice to her friends again. Turns out she wasn’t bewitched after all! They forgive her, no questions asked.

Also Willow and Xander almost kiss while Buffy’s away, but then Xander totally forgets about Willow as soon as Buffy gets back. You suck, Xander!

Buffy finds an empty grave while on patrol, and discovers that someone’s been digging up the bodies of young women that died in a recent accident. At first, they think it might be a flesh-eating demon, but then Cordelia finds a bunch of body parts in the school dumpster, and they deduce that a student might have done it. They quickly figure out that two creepy boys from the science club, Chris and Eric, are trying to create their own perfect girl by sewing together and reanimating parts from several dead girls. Like if Dr. Frankenstein were an incel.

But twist! It turns out that they’re not doing it for themselves, but for Chris’ brother, whom they reanimated after he died in a rock climbing accident. Chris’ brother used to date Cordelia and still holds a torch for her, so he rejects all of the dead girls’ heads, and wants to use Cordelia’s head. Chris tries to kidnap Cordelia, but then gets caught by Buffy and conveniently has a change of heart. Eric does kidnap Cordelia, and tries to go ahead with the plan to behead and reanimate her. Buffy finds them in the nick of time, with Chris’ help, and has a big fight with the zombie brother, which accidentally starts a gas fire. The zombie brother almost gets the best of her, but then he sees that the headless Frankenstein girl body is about to burn up, so he climbs on top of her (ew) and they burn up together.

There’s also a little bit of emotional fallout from “When She Was Bad,” mostly between Buffy and Angel. Angel’s all jealous that Buffy did her little “sexy dance” with Xander (LOL), so Buffy lies to him about going out on patrol so she can get a break from him. (Can’t she just say she doesn’t want him to come? I guess not, since he just sort of lurks all the time without asking permission.) In the end, they have a relatively mature conversation about how he’s jealous, not that she might like Xander, but that Xander gets to be with her during the day.

There’s a new vampire in town! Spike arrives home to Sunnydale, with a creepily soft-spoken paramour named Drusilla in tow. Spike is a platinum-blonde vampire with a terrible British accent and a penchant for snarky remarks. And as we all know, he and Buffy are going to make out a whole lot in later seasons. Anyway, Spike promises the Anointed One that he’ll kill Buffy on some feast day that all the vampires are excited about. Knowing the feast day is coming, Buffy’s friends–including Cordelia, who grudgingly helps out–help her make stakes in preparation.

Buffy herself has bigger things on her mind: not getting expelled from school. Principal Snyder sets Buffy and a Classic Bad Girl named Sheila to arranging a parent-teacher night all by themselves. If it’s not perfect, they’ll be expelled. Unfortunately, Sheila is a bad partner: she puts in almost no effort, and then she gets herself kidnapped by Spike as a little snack for his girlfriend.

On parent-teacher night, Buffy does a pretty bad job: she makes lemonade with no sugar in it and tries to keep Principal Snyder from telling her mom how bad a student she is by saying her mom doesn’t speak English, even though there are only like three parents there and the dude clearly is going to find out she was lying.

But things get even worse from there: Spike attacks the school because he’s decided not to wait for the feast day. He brings a bunch of his minions and locks all the school doors and cuts the power. Mrs. Buffy, Principal Snyder, and a few others get locked in the cafeteria, while Giles and Xander get locked in the library, and Willow and Cordelia end up in a janitor’s closet together.

Buffy climbs up into the ceiling and crawls around so that she can use the element of surprise against the vampires. She successfully defeats a few of them–including Sheila, who shows up long enough to almost kill Buffy with a fire extinguisher axe but then panics and runs away when she realizes how tough Buffy is. But Spike, who has already killed two slayers in the past, remains at large.

Meanwhile, Giles sends Xander out through some secret exit in the library to get Angel to help them defeat Spike. Angel uses Xander as bait to try to convince Spike that he’s still on Spike’s side. Unfortunately, Spike doesn’t take the bait, and Xander lives to creep another day. Xander and Angel end up outside fighting the rest of Spike’s crew, while Spike and Buffy have a showdown in the hallway right outside the cafeteria. Spike bests Buffy and is about to kill her when Mrs. Buffy appears out of nowhere and bonks him on the head with the side of the axe, saving Buffy. Yay, Mrs. Buffy!! After that she tells Buffy she’s proud of her because she thinks of others in a crisis. Aww!!

Spike returns underground, defeated. The other vampires think he should sacrifice himself as penance, but he decides to just kill the Anointed One instead. He says there’s going to be more fun around here now. I’ll say!